Our favourite film locations to visit by campervan

From quaint fishing coves and mysterious moors to dramatic castles and sumptuous country piles, the UK really has been blessed with some of the most stunning locations in the world - and many of them have made it onto the silver screen. If you want to visit the site of your favourite flick, take a look at this list of top film locations worth visiting in your campervan.

But before you start rolling, take a moment to get your campervan insurance in place. You don’t want a breakdown, accident or theft, to get in the way of your next blockbuster trip!

Many of the UK film locations included in this list have come rather late in the day to Hollywood stardom. But the Old Royal Naval College in London is undoubtedly the exception.

The first movie shot at this iconic London building was a 1925 silent film called Sons of the Sea. But it was from 1958 that the movie industry really took notice, with the Cary Grant and Ingrid Bergman film Indiscreet.

The stunning Painted Hall has to be the most popular location here for directors. Seeing many Hollywood greats pacing its floors, such as Johnny Depp as Captain Jack Sparrow in Pirates of the Caribbean - On Stranger Tides, and Meryl Streep as Margaret Thatcher in The Iron Lady.

Other areas of the building will also be familiar to film fans. In the climactic final battle scene in Thor: The Dark World, a gigantic spaceship crashes into the lower grand square. Fortunately, the mysterious powers of CGI saved the building from considerable damage! 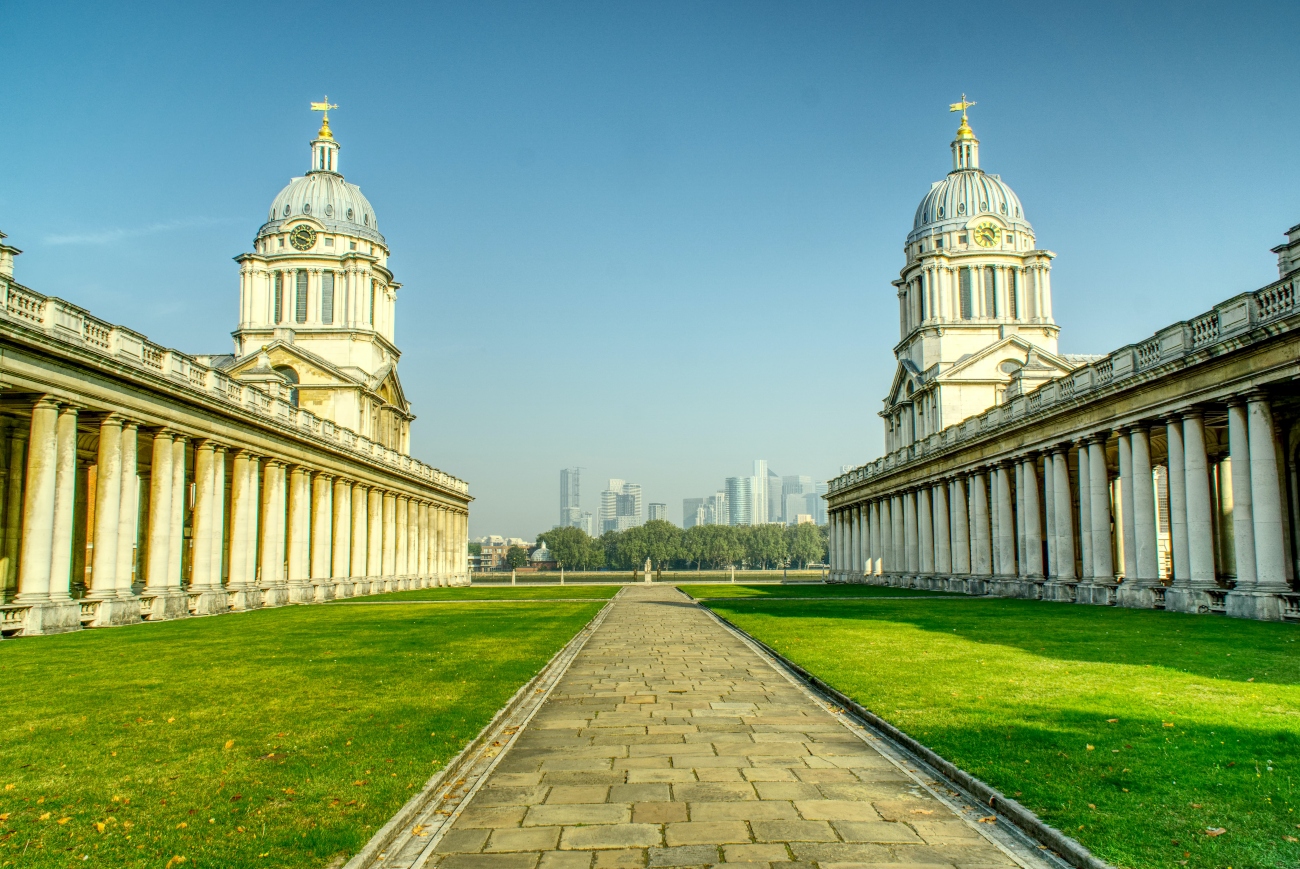 Visiting the fruit stalls and barrows of Portobello Road is also a revelation for Paddington Bear when he first arrives in London to live with the Browns. So of course, the iconic street has to feature in both the recent movie adaptations.

And if you’re a fan of classic British films, did you know The Italian Job also has roots in Portobello Road? Charlie Croker’s cunning plan was devised in a cluttered mews flat next door to Alice’s Junk Shop. If you’re visiting today then it’s still well worth a rummage!

A dense fog and dark winter light hang over a forest in darkest Germania. Thousands of Roman soldiers are preparing for a brutal battle against a horde of local tribes. Fires burn as Russell Crowe's character, the Roman general Maximus, prepares his men for victory in a rousing speech.

There are few more famous opening scenes than this one from Ridley Scott’s 1999 hit Gladiator. But in fact, the dense area of woodland was not in ‘Germania’ but just south of Farnham in Surrey. If you want to get a feel for what it might have been like for a terrified Roman legionnaire then a rise specially constructed for the film remains today. Coincidentally it offers spectacular views of the surrounding area.

Such was the impact of that scene on the viewing public that many other films have also been shot here. Scenes featuring this location appear in Wonder Woman, Children of Men, Captain America: The First Avenger, The Golden Compass, War Horse, Robin Hood and Avengers: Age of Ultron.

Just a 21-mile drive north of London will bring you to this fine example of a Jacobean house and garden in spectacular countryside. Built in 1611 by Robert Cecil, 1st Earl of Salisbury and chief advisor to James I.

The house, which is close to many major film studios, is a popular filming location, having been used for the likes of Cromwell with Alec Guinness, 1989’s Batman, Hot Fuzz, and the Lara Croft movies. If you’ve been to the cinema recently then you’ll soon recognise the house as featuring extensively throughout black comedy The Favourite as the home of Queen Anne.

Do your best to recreate Olivia Colman’s Oscar-winning performance as you wander around the house and its gardens. Or perhaps one of the other incredible acting performances that these walls have been privileged to witness. From Tilda Swinton in the 1992 film Orlando to the latest must-watch Netflix series Bridgerton there’s plenty to choose from.

If you’re looking for a fun family day out on your movie road trip then this magical woodland in the Forest of Dean could be just the ticket. Regarded by many as the inspiration for the elven forests in Tolkien’s The Lord of the Rings, this ancient woodland site has also played host to plenty of real-life movie stars.

You can spot the ancient trees, mossy scowles, and maze of hollow passages that dominate the area in various movies. These include The Secret Garden with Colin Firth, Jack the Giant Slayer with Ewan McGregor, and regular instalments of Doctor Who.

Perhaps the biggest film to have featured this location is 2015’s Star Wars: The Force Awakens. The mysterious woodland provided the perfect backdrop for Rey’s first encounter with Kylo Ren in the forests surrounding Maz Kanata’s castle on the planet of Takodana. Will the force be with you when you visit?

Scouting for locations is a big part of a film director’s job. And when the script asks for a quaint British village that hasn’t changed in centuries, the small village of Lacock is at the top of the list.

Owned almost entirely by the National Trust, the village is just south of Chippenham in Wiltshire and attracts many visitors due to its unspoilt appearance. The village has featured in many TV series including Cranford, The Hollow Crown, Wolf Hall, Pride and Prejudice, and Downton Abbey.

However, in the world of cinema, it’s most recognisable from the world of Harry Potter having stood in as Hogwarts for two of the films.

For more information about the filming locations for Harry Potter worth visiting in your campervan, take a look at our other article.

Knowledgeable tourists have been flocking to Wells in Somerset to see its stunning Cathedral and architecture for many centuries now. However, in recent years a new breed of visitor has been attracted to England's smallest city. Those wanting to see buildings and locations featured in some of their favourite films and TV series.

A wild and mysterious place, it’s no wonder that Dartmoor has been used as a location for filming many times over the years. The first movies to be shot here were way back in 1929 with The American Prisoner and A Dartmoor Cottage. However, easily the most famous movie in which you’ll see this area is Steven Spielberg’s 2011 blockbuster War Horse.

Scenes were shot largely around the historic villages of Sheepstor and Meavy, including Combestone Tor, Haytor and Ringmoor Down. One of the easiest to recognise locations is Ditsworthy Warren House, a Grade II listed building on the south-western edge of the national park.

Campervan insurance is a must when visiting out-of-the-way locations like national parks. Ask the team about adding breakdown cover to your policy when you get a quote. 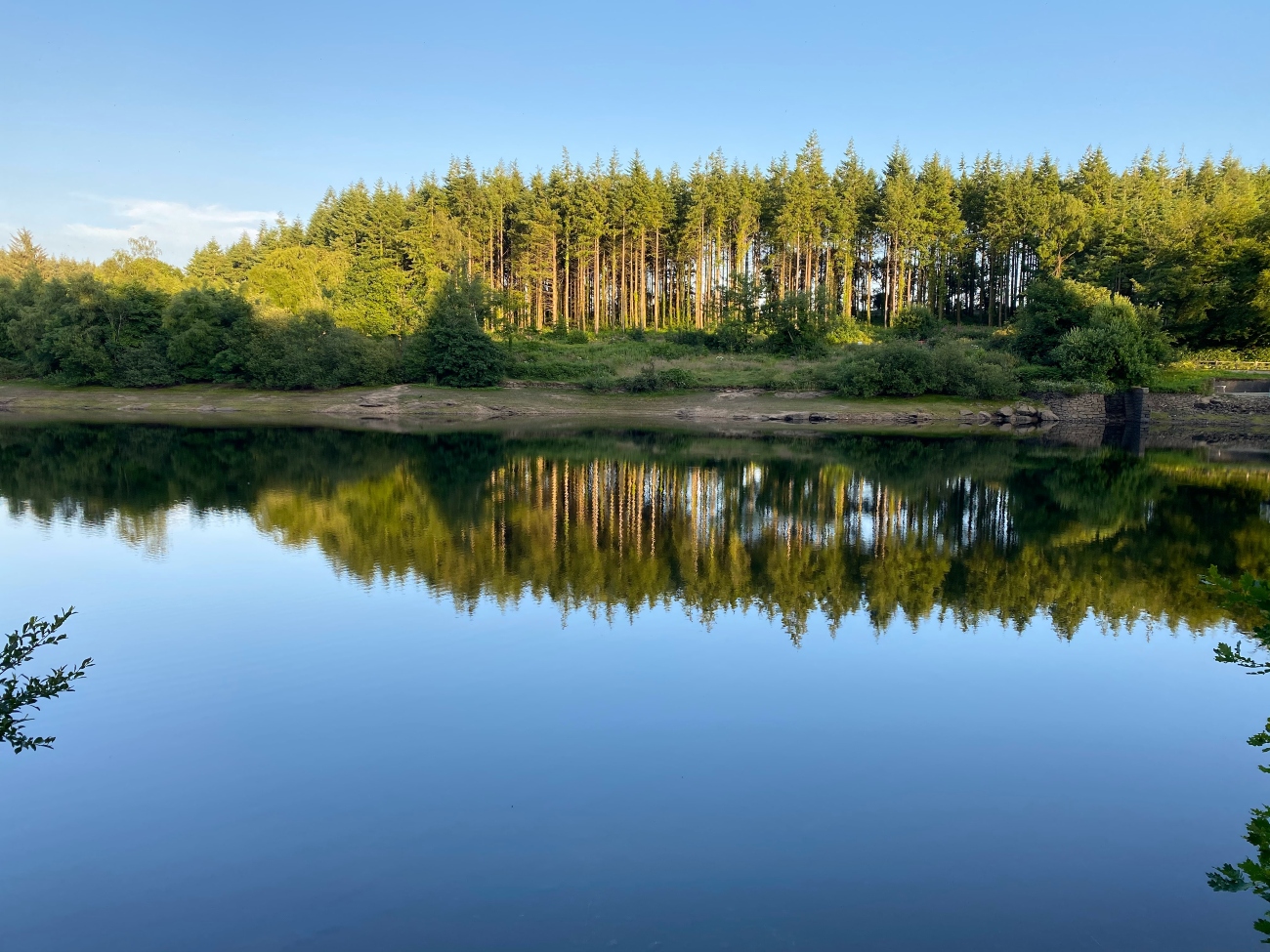 Stately homes are always popular among movie-goers and directors. And there are few more likely to move the hearts of film romantics than Chatsworth House, one of England’s largest and most opulent homes.

Chatsworth was featured most famously in the 2005 film of Pride and Prejudice starring Keira Knightley and Matthew McFadyen. But also in the 2008 biopic The Duchess, where Knightly returned to play the 18th Century Duchess of Devonshire, Georgiana Cavendish. In 2010, Sir Anthony Hopkins and Benicio del Toro also worked at Chatsworth on the remake of the 1940s classic The Wolfman.

The beautiful and dramatic landscapes of Cumbria have been the muse for many actors, composers, writers and filmmakers over the years. From family favourites like Peter Rabbit and Miss Potter to Hollywood epics like Snow White and the Huntsman and Star Wars: The Force Awakens you won’t be able to move for stunning locations.

However, our favourite film to feature this area has to be the cult British comedy classic Withnail and I. Starring Richard E. Grant and Paul McGann it was filmed in and around Penrith, Shap and Wet Sleddale. If you fancy going on holiday by mistake then this is where to head. Over 30 years after the film was made, if you want to pay homage to all the movie’s key locations then this article from the film buffs over at the British Film Institute is a must-read.

With the Lake District well known for narrow country roads, having campervan insurance is vital to protect against bumps and scrapes.

Noted for its strong waves and currents, this picturesque Welsh beach is one of Wales’s top surfing locations. But you won’t spot this location in a 1960s or ‘70s surf classic. Instead, if you were watching carefully, you’ll first have seen it in the 2010 film Robin Hood, starring Russell Crowe. When it was overtaken by hundreds of extras and 150 horses to film the invasion of medieval England by a French army.

The beach was also the site of one of the saddest moments in the Harry Potter films, the death of Dobby the house elf. You can still visit the site of Dobby’s grave, tucked away among the sand dunes. Look out for the ever-growing pile of painted pebbles and socks. A fitting memorial indeed!

We’re not crying, you are!

Did we mention there are a lot of sites for Harry Potter fans to visit around the UK? Well one of the best has to be the 11th Century keep at Alnwick Castle. Several important scenes were shot here. Wander around the Outer Bailey where Madam Hooch taught Harry and his friends broomstick riding in The Philosopher’s Stone.

Next, many of the scenes of Hogwarts students and staff hurrying between classes were filmed within the castle’s courtyards and gates. Indeed, Harry and Ron crash-landed the Weasley family’s flying car in the Inner Bailey.

Finally, the imposing Lion Arch was a way in and out of Hogwarts, heading towards Hagrid’s cabin and the Forbidden Forest.

But it isn’t all about wizards, witches and muggles at Alnwick. As well as 1997’s Elizabeth starring Cate Blanchett and 1991’s Robin Hood: Prince of Thieves, the castle was recently featured in Transformers: The Last Knight.

Monty Python and the Holy Grail is an all-time comedy classic. Following the cross-country journey of an assorted band of misfits who seem to meet a constant stream of hilarious yet deadly foes, it’s an incredible road trip movie.

While most of the castle scenes in the film were shot around the medieval Doune Castle in Stirling, the final spot on our list has to be taken by the unique Castle Stalker. Tucked away on a small tidal islet on Loch Laich, this 15th Century keep was made famous as “The Castle of Aaargh” from the film’s final scene. If you hear someone shouting “Your mother was a hamster, and your father smelt of elderberries!” then don’t worry. They’re just Monty Python fans letting off steam! 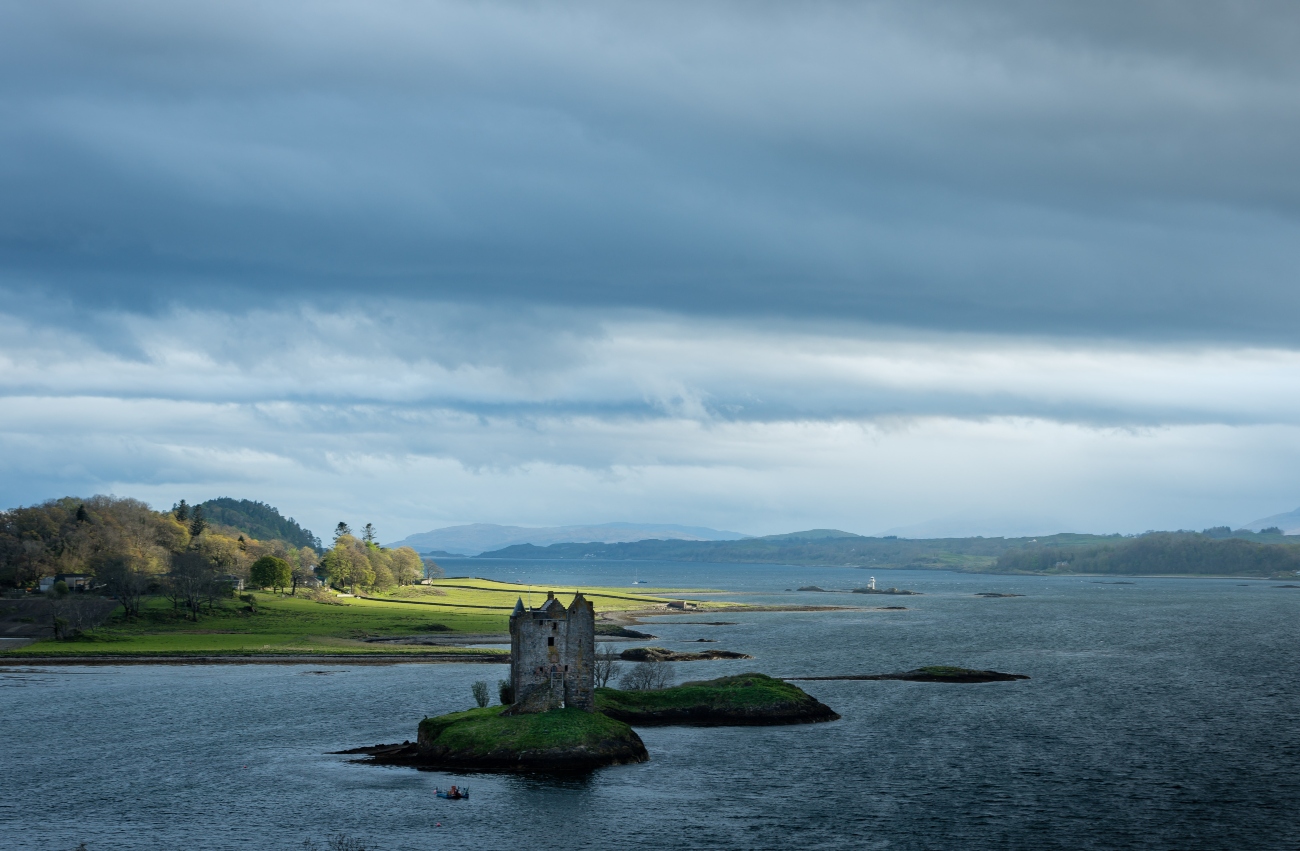 If the small screen is more your cup of tea, then read our other guide to the best TV locations to visit in your campervan or motorhome.

Whether you’re exploring the UK or further afield this year, make sure your home on wheels is protected from accident, theft and more with cover from the specialists.

Get a quote for campervan insurance from Motorhome Protect today.