When the weather takes a turn for the worst or you need to chill after a long day out adventuring, settling down in the back of your motorhome with your favourite TV series can’t be beaten. But did you know that many of our favourite TV shows are shot around the UK? And are so easy to visit in your trusty motorhome?

Sounds like fun? From Line of Duty to The Great British Bake Off and everything in between, our essential guide to the best new TV filming locations is a must-read. It is a great place to start when planning your next trip to the homes of some of the nation’s best-loved shows.

So, crack open the snacks and get yourself comfy on the sofa for a rundown of some of the best TV shows and their real-world filming locations.

But before you get all starry-eyed, you’d better give us a call to get your motorhome insurance in place. You don’t want a breakdown, accident or theft getting in the way of your plans for a red-carpet entrance. Let’s keep the drama firmly on TV!

Set during England's fabulous Regency era, Bridgerton is chock-full of scandalous and quick-witted storylines set in London high society. But it’s the swoon-worthy properties that have left many fans desperately wondering where it was filmed.

From the wisteria-clad exterior of Bridgerton House to its sumptuous interior the stars and crew travelled far and wide across the UK to create the gorgeous settings. Parts of London, Hampshire, Surrey, Bath, Buckinghamshire, and Kent are all on show during this seductive drama series from Netflix.

First stop must be the English Heritage-owned city mansion Ranger's House in Greenwich, South east London. Used for the Bridgerton House exterior shots, this Georgian-era villa backs onto Greenwich Park. It used to be the elegant home to rich and cultured aristocrats such as King George III's elder sister, Princess Augusta. Today it’s home to the world-class Wernher art collection, one of the greatest surviving private art collections in Europe.

But if you want to walk the very corridors trod by Lady Bridgerton, her four sons (Anthony, Benedict, Colin, and Gregory), and her four daughters (Daphne, Eloise, Francesca, and Hyacinth) then you’ll need to travel to RAF Halton in Aylesbury, Buckinghamshire.

One of the UK's largest Royal Air Force stations, it was here at historic Halton House where the memorable scenes featuring the grand hall, stairs, hallway, and smoking room were all filmed.

For fans of serial crime drama Broadchurch, a visit to the south-west of England must be on the cards for any motorhome tourer. While the small Dorset community of Broadchurch is fictional, most of the locations can be found in West Bay, Bridport and Clevedon on the world-renowned Jurassic Coast.

For such a murderous and mysterious story, the dramatic cliffs and stunning scenery around West Bay, Dorset were a perfect backdrop. Indeed, Chris Chibnall who wrote Broadchurch said the series was a ‘love letter’ to the scenery of the Jurassic coast with the cliffs, the sea and the beach all key elements of the story.

But if you want to recreate some of the actual street scenes then the pretty seaside town of Clevedon, over in North Somerset, needs to be visited, too.

If you’re planning on a motorhome trip here then read our recent guide to visiting the Jurassic coast. This UNESCO World Heritage Site is perfect for motorhome owners.

Long-running sci-fi favourite Doctor Who is beloved by many viewers worldwide. If you’re one of them, then visit the beautiful Welsh city of Cardiff. There are a huge number of filming locations worth visiting here while enjoying all that Cardiff has to offer. First off, a frequent re-fuelling spot for the Tardis can be found at the Roald Dahl Plass handily located on the Cardiff Space-Time Rift.

You’ll also find plenty more Doctor Who filming locations across the city. These include Dyffryn Gardens, Cardiff Castle, the Senedd in Cardiff Bay and the National Museum of Wales. There are so many to spot here that it’s easy to do your own Doctor Who walking tour while exploring. Cardiff also features in the popular spin-off series Torchwood and The Sarah Jane Adventures.

Even if you’re not a fan of the show, the picturesque village itself has a long and fascinating history dating back to the Middle Ages. Exploring the hidden village paths, narrow winding streets, historic cottages, and stunning views will all give you an insight into the vibrant local life.

Be warned if you’re visiting in your motorhome, Port Isaac is renowned for having one of the narrowest lanes in Britain, the aptly named Squeezy Belly Alley! Park in the large car park at the top of the hill and stroll down to the village to avoid getting stuck.

If you do get yourself into a tight squeeze and suffer some bumps and scrapes then you’ll be pleased to have motorhome insurance to keep everything ship-shape.

After 52 episodes and one film, the dramatic story of the trials and tribulations of the aristocratic Crawley family and their below-stairs servants seemed to have ended back in 2019. But with Downton Abbey 2 scheduled for release in cinemas in December 2021 it might be time to reacquaint yourself with some of the real-life locations from the series.

Any Downton fan simply must head to the stunning grandeur of the Grade I-listed Highclere Castle in Hampshire. The 5,000-acre historic estate is certainly a most fitting home for the Crawleys. Booking ahead is advised if you want to avoid disappointment.

If you’re heading through the Cotswolds then a worthy stop-off is the charming village of Bampton in Oxfordshire. Used as the setting for the fictional Yorkshire village of Downton, keep an eye out for familiar buildings here. These include the St Mary the Virgin church, the Grantham Arms, Isobel Crawley’s house, and the entrance to the Downton cottage hospital. 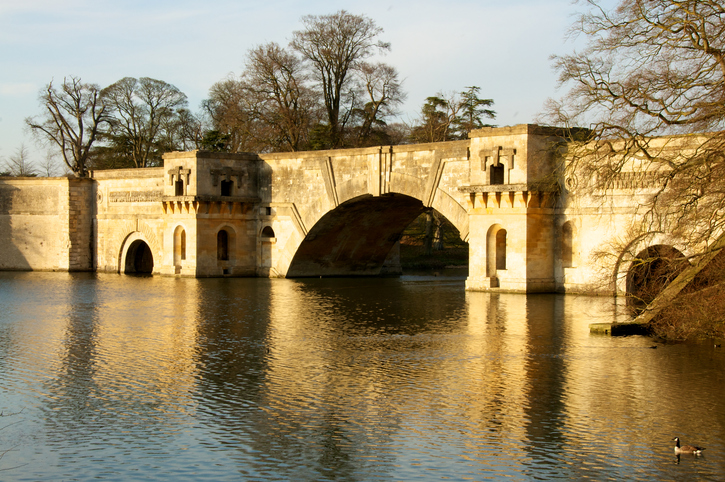 With Game of Thrones spin-off House of the Dragon hitting our screens in 2022, now’s a good time to head over to Northern Ireland to visit the locations featured in the original iconic series. Filming of seasons one to eight took place in around 25 locations dotted around this stunning country.

These include the Titanic Studios in Belfast, Cushendun Caves, Murlough Bay, Ballintoy Harbour, Larrybane, Antrim plateau, Inch Abbey, Portstewart Strand, and Downhill Beach. The National Trust’s Castle Ward near Strangford in County Down is perhaps the most famous filming location as it stood in for the iconic Winterfell home of the Stark family.

However, our favourite is the 1,600-acre Tollymore Forest at Bryansford at the foot of the Mourne Mountains. Its appearance in the very first episode of Game Of Thrones set the tone for the series. Remember when Ned Stark comes across the orphaned direwolves and gives them to his children? That was filmed here!

The Great British Bake Off

A cup of tea and a slice of cake in front of the telly is a popular pastime in many British households. And apparently, we also love to watch people bake cakes, eat cakes, talk about cakes and cry over cakes, too! Since 2014, the phenomenally successful reality show GBBO has been filmed in Welford Park in Newbury. With the iconic bright white marquee set up in the gardens of this stunning country estate in Berkshire.

Before then this quintessentially-British show was also filmed in Valentines Mansion, Redbridge and Harptree Court, Somerset. While the most recent season in 2020 was filmed at the victorian-style Down Hall Hotel in Bishop’s Stortford. This was done so producers could comply with social distancing. Sitting upon 110 acres of land, there’s more than enough space for the bakers to maintain that vital two-metres distance.

Take your mixer and chef’s hat on a visit to all these fabulous locations and you’ve got yourself a Great British Tour! And a heck of a lot of cake!

After a recent nail-biting and record-breaking finale, Line of Duty has been named the UK's most-watched drama series of the century so far. When the hit BBC police drama finished airing its sixth series in April 2021, ratings figures reached a staggering 15.24 million viewers. To get over its ‘ending’ visit some of the many filming locations around Belfast and follow in the footsteps of the AC-12 unit. These include the BT Tower, Fitzrovia Mansions, Odyssey Pavilion, Belfast City Hall, and the East Belfast Yacht Club.

Is there anybody left worth murdering in the fictional county of Midsomer? Hopefully your visit to South Oxfordshire will not result in the levels of murder, mayhem and mystery encountered in this detective drama series! Based on the books of Caroline Graham about Chief Inspector Barnaby, the series has been immensely popular since it launched on ITV in 1997.

The market towns of Thame, Henley-on-Thames and Wallingford as well as the village of Warborough and small town of Watlington all appear in the series. Just make sure your motorhome is well-secured before turning in for the night!

Scotland has been the location for many movies and TV series over the years. And with its mix of history, romance and dramatic landscapes it’s no wonder it was chosen as the setting for Netflix’s time-travelling Outlander series. There are numerous locations worth visiting here such as medieval stronghold Doune Castle in Perthshire which stands in for fictional Castle Leoch. Or perhaps visit the iconic Blackness Castle near Edinburgh to explore the lair of its most evil villain Captain ‘Black Jack’ Randall.

Filming locations don’t come much more stunning than the wild and windswept coast of Cornwall. Fans of this BBC series and nature lovers alike will have much to soak up whichever filming site you choose to visit. A tour of these locations will take you all over the county.

Start by taking a hike across the rugged Bodmin Moor, before exploring the abandoned buildings of Botallack Mine near St Just in Penwith. Wander through the stunning scenery of St Agnes Head and visit Gunwalloe near Helston on the Lizard Peninsula.

Finally, step back in time with a stroll down to the unspoilt 18th Century working port in the village of Charlestown near St Austell. There are a huge number of other National Trust owned beaches, headlands and historic mines worth visiting to bring the series truly to life.

One of the stand-out TV series of recent years, The Crown follows the life and reign of Queen Elizabeth II. Those wanting to wrap themselves in this award-winning historical drama series are spoilt for choice.

Pay a visit to Hatfield House, Ely Cathedral, Knebworth House, Belvoir Castle, the Old Royal Navy College in Greenwich and Wrotham Park amongst many others. There really was no expense spared when choosing locations and Visit England has details on many of these. What a great way to relive the finest moments of this most regal show!

There are many fascinating locations here but that doesn’t mean you should be unprepared for any drama along the way. Motorhome insurance is essential no matter what!

Our team of insurance specialists at Motorhome Protect are always ready to keep your motorhome well covered if something untoward happens. Cover from our panel of leading insurers can come with many benefits including:

Get a quick quote for motorhome insurance from Motorhome Protect today.