10 of the best destinations for Harry Potter fans - young and old!

If, like us, you failed to receive a Hogwarts letter delivered by an owl when you were 11 years old, you might be feeling the need to discover what life as a non-Muggle would be like. Well, as a campervan owner you’re in luck!

Everyone's favourite young wizard travelled all over Britain during his long-running battle with Voldemort. Fortunately, these locations were faithfully recorded in all eight films (and seven books) so we know exactly where to send you.

So, what are you waiting for? Grab your broomstick and a bottle of Butterbeer as we discover the magical world of Harry Potter.

But, first things first. You’d better get your insurance for campervans sorted. You never know when a band of Death Eaters or an angry centaur might come knocking!

“Mr. and Mrs. Dursley of number four, Privet Drive, were proud to say that they were perfectly normal, thank you very much.”

Perhaps an odd choice for the opening line of such a magical series, but if you want to find out what makes Harry tick then a trip to the home of the dreadful Dursleys is a great way to start.

Located just 40 miles west of London, you’ll find Harry’s first home in the Martins Heron suburb of Bracknell, Berkshire. When you arrive, number 12 Picket Post Close is the one you’re looking for.

You might find it tricky to pick out the right one amongst all the other identical tan and brown-bricked homes in this cul de sac. But don’t despair, outside of this particular home, there’s a helpful sign that says Privet Drive.

The film studio only used the house for the inside and outside shots of Harry’s home for the first film. But the real-life Dursley residence is still well worth visiting. 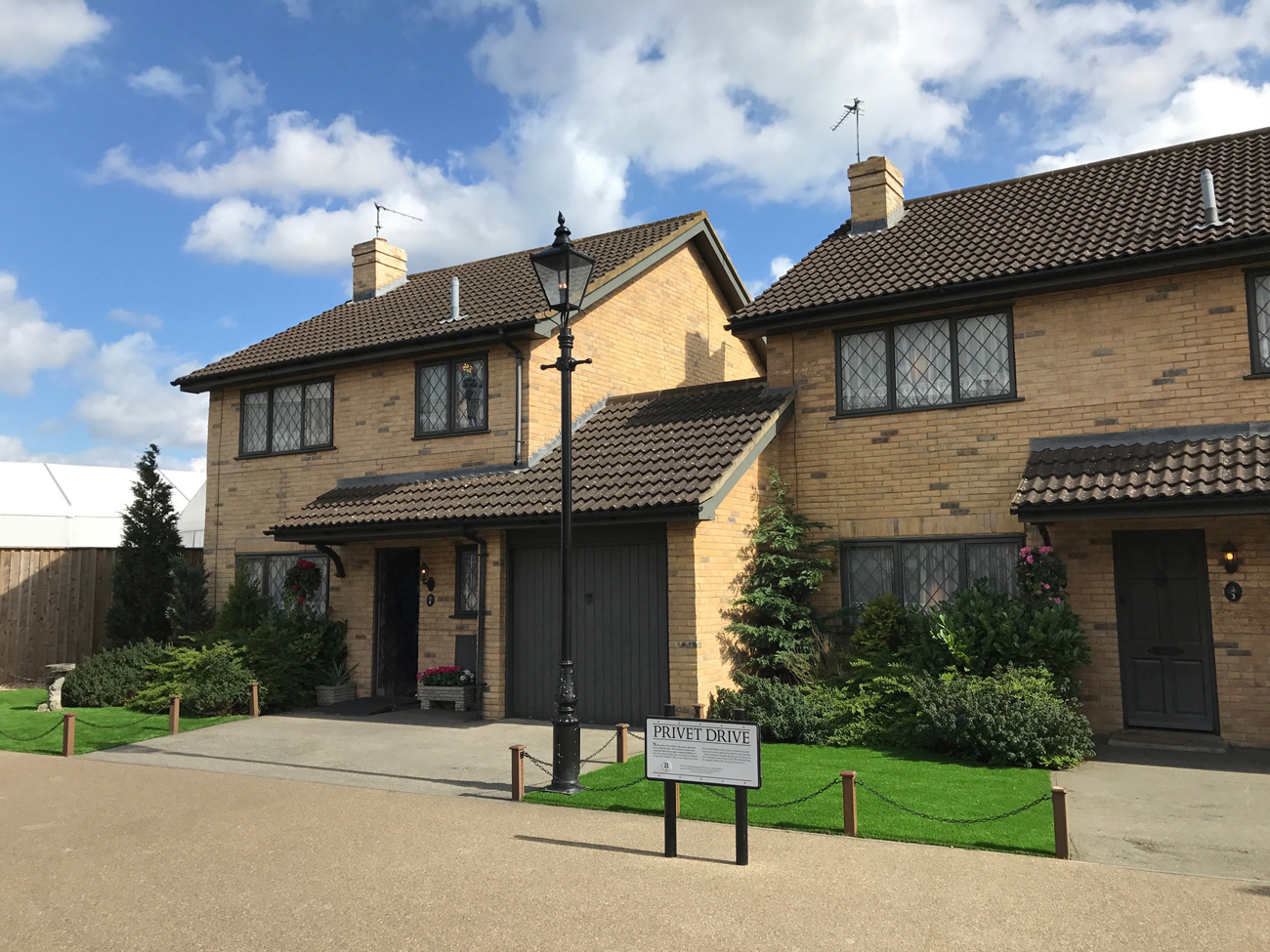 The world loves tales of struggling writers who make it big, almost as much as orphans saving the world! So, any serious Harry Potter fan needs to make a pilgrimage to Edinburgh’s Elephant House cafe.

This is where J.K. Rowling, despite being a single mother and under great financial stress, first breathed life into the incredible fantasy world of Harry Potter.

If you can avoid the crowds that sometimes descend on this cafe it’s a great place to visit and feel inspired.

Indeed, if you have the time, it’s worth exploring Edinburgh to spot some of the other famous Potter connections. One of our favourites is Greyfriars Kirkyard, which you can visit at any time of day or night.

Here you’ll find some of the names that inspired some of J.K. Rowling's most famous characters. The most famous example is the grave of Thomas Riddell, but you’ll also find a Moody and a McGonagall.

Indeed, the whole Kirkyard itself is believed to have been the inspiration behind the final resting place of Harry’s parents – the other-worldly graveyard in Godric’s Hollow…

If you’re hoping for a bit of literary magic to rub off on you, then place your hands on J.K. Rowling's handprints. These have been immortalized on the Royal Mile in front of Edinburgh City Chambers.

Yet another Potter sight in Edinburgh are the nearby cobbled streets of Victoria Street and Candlemaker Row.

These colourful and historical places were the inspiration for the wonderful Diagon Alley – anyone fancy a robe-fitting at Madam Malkin’s?

On the subject of Diagon Alley, if you really want to experience the likes of The Leaky Cauldron, Ollivanders, and Flourish & Blotts then you’ll need to head far south to London’s Leadenhall Market. Here many of the exterior shots were filmed.

If you fancy a pint and a bite to eat then just over the River Thames can be found foodie paradise Borough Market and the Third Hand Book Emporium. Also known as the Market Porter Pub for visitors in the muggle world.

If you mention King’s Cross Station to any Potter fan, Platform 9 ¾ is no doubt the first thing that comes to mind.

Tired of tourists constantly asking where Platform 9 ¾ is, the station authorities have built an ingenious photo op spot that pays suitable homage to the boy wizard.

You’ll now find a luggage trolley disappearing into the wall beneath a sign for platform 9 ¾. If you don’t want to wait in line then you might need to arrive at a quieter time of day.

But if there is a queue then there’s a shop next door where you can purchase all manner of Potter memorabilia while you wait.

And so on to one of the most famous rail rides to be immortalised in movie history – the stunning cross-country journey to Hogwarts School of Witchcraft and Wizardry!

Whether you’re a film fan or a steam train enthusiast, this is a once-in-a-lifetime trip. Journey through the magical Scottish landscape aboard the Jacobite steam train just as Harry and his school friends did.

You must visit the 100ft-high Glenfinnan Viaduct in Lochaber. This is the archway bridge that the Hogwarts Express crosses on the way to Hogwarts and is the highlight of any trip.

If you want to walk in Harry, Hermione and Ron’s footsteps then you’ll need to grab a ticket to ride the steam train yourself. The Jacobite runs seven days a week from late April to October. Tickets cost £49 for an Adult Day Return (or £69 if you want to travel in style with a First Class ticket).

If you’re a keen photographer and want to capture the sight from a distance then there are plenty of vantage points to choose from.

Arrive at either 11am or 3pm as these are the best times to catch the steam train chugging over the viaduct – simply spectacular.

Those looking to disembark at the real-life Hogsmeade Station need to climb aboard the North Yorkshire Moors Railway.

Here you can enjoy a steam train ride through picturesque countryside before pulling into the wonderfully bright and cheery Goathland Station (aka Hogsmeade). We didn’t spot Hagrid when we visited but he might make an appearance for you.

If you leave your van behind while taking a steam train trip, make sure you’ve got campervan insurance to cover any problems while you’re adventuring.

Any visitor to the iconic Alnwick Castle in Northumberland is sure to scan the skies for evidence of Madam Hooch’s broomstick flying lessons taking place in the Outer Bailey.

Today you can join the castle’s resident broomstick experts for training and get a behind-the-scenes look at one of the best Harry Potter filming locations.

Quidditch sports fans should journey further north to the Scottish Highlands. Here you’ll see the locations that provided a perfect natural backdrop to some of the film’s exciting Quidditch scenes.

The inter-house broomstick ball games were often filmed in the extraordinarily beautiful valley of Glen Nevis, Fort William. Be sure to spot the spectacular Steall Falls at the base of Ben Nevis. It was here that Harry battled a dragon during the Triwizard Tournament in Harry Potter and the Goblet of Fire.

While you’re here, the village of Glencoe was an important filming location for Hagrid’s hut in the Prisoner of Azkaban film. The pumpkin patch, Buckbeak the hippogriff, Hermione punching Draco Malfoy… good times.

For those of a more reflective turn of mind, visit the tiny island of Eilean na Moine in Loch Eilt, just west of Fort William. This was the peaceful location of Dumbledore's final resting place. 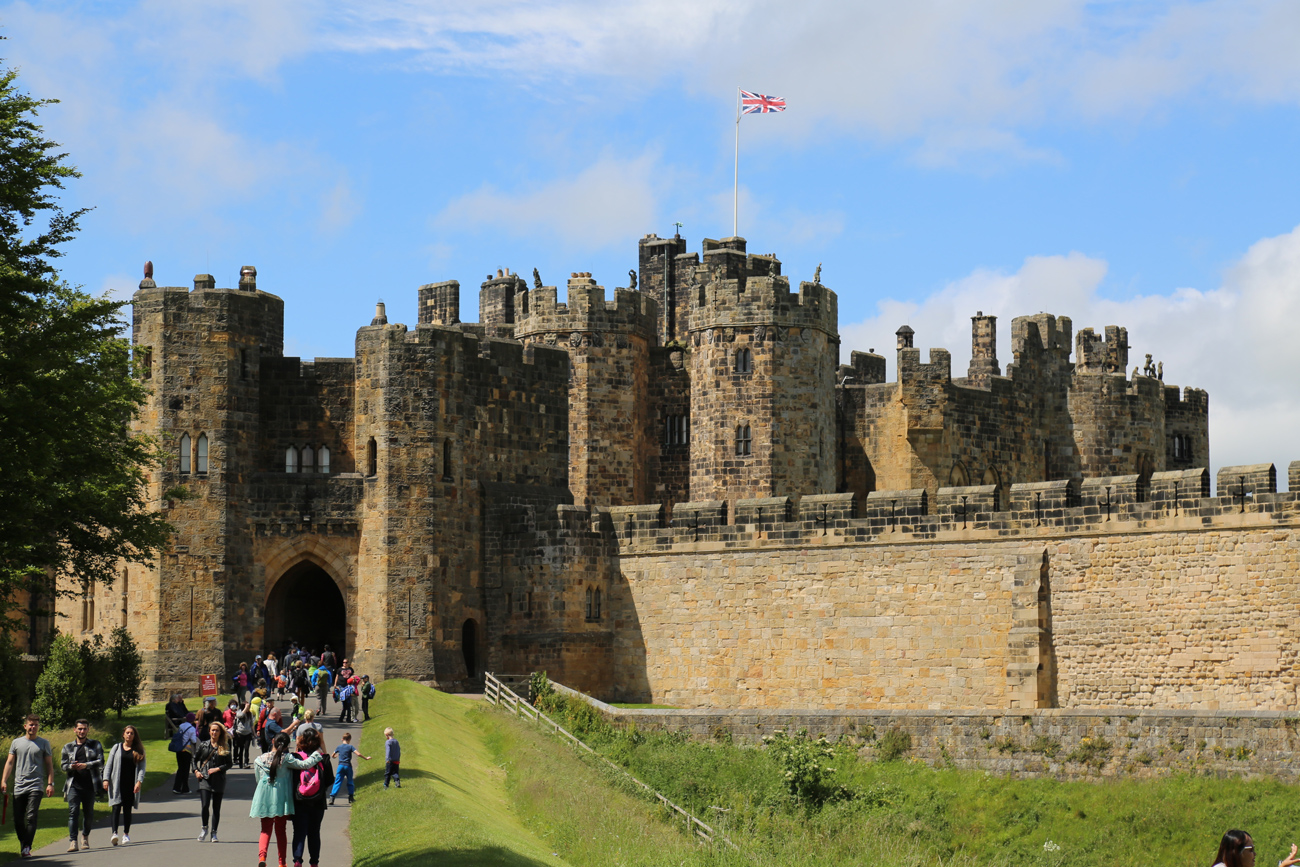 The National Trust’s Lacock Abbey in Wiltshire is perfect for those wishing to practise their wizard and witch skills.

The Warming Room contains a giant cauldron and was previously Professor Quirrell’s Defence Against the Dark Arts classroom. While the mysterious Professor Snape taught potions in the Sacristy.

If you’re hoping to stumble upon the Mirror of Erised, which shows your heart’s deepest desire, then head to the Chapter House.

Lacock village itself is a joy to explore, see if you can spot Horace Slughorn’s home from The Half-Blood Prince as you wander the quaint streets.

If you want to continue your studies then also visit Durham Cathedral’s Chapter House where the imposing Professor McGonagall taught the young Harry and his friends the art of transfiguration. Your first lesson is to turn animals into water goblets. Like so!

The Norman cathedral is also home to the magnificent cloisters which became a snow-covered quadrangle where Harry releases Hedwig the owl from his hands in the first film.

It’s also where Ron’s attempt at a slug-vomiting charm (Slugulus Eructo) backfired so disgustingly in Harry Potter and the Chamber of Secrets.

For those who don’t know, the charm causes the victim to burp up slugs and slime for approximately 10 minutes. Eww!

If you want to explore the spooky corridors of Hogwarts in search of Nearly Headless Nick or Moaning Myrtle then the fan-vaulted cloisters of the 1,300-year-old Gloucester Cathedral are a must-visit.

If you’re not quite so brave then visit the cathedral’s lavatorium, where monks used to wash in past times. Although you’d better watch out, it was here that Harry and Ron attempted to hide from a dangerous mountain troll. It didn’t end well, for the troll.

If you haven’t had enough frights and chills then head for a wooden door that leads down to the cathedral’s old crypt. It’s rumoured to be haunted by monks from the old monastery! Ghostly monks or an angry mountain troll? What a choice!

There are so many filming locations here that students at Oxford University really must feel like they’re living in one long Harry Potter dream. Many of the university’s age-old buildings were used as magnificent backdrops throughout the series of films.

First visit Bodleian Library which starred in various guises in many Harry Potter movies. The elaborately vaulted Divinity School was Hogwarts’ very own infirmary where Harry wakes up after his first near-death confrontation with Voldemort.

While the medieval Duke Humfrey's Library was used as Hogwarts’ library itself. Even if you are wearing an invisibility cloak you need to watch out for the Monster Book of Monsters – it’ll leave you with more than a paper cut!

Just a short broomstick-ride away is the venerable Christ Church College. Its cloisters and quadrangles being home to yet more Potter locations.

Here you’ll find the 16th Century stone staircase where Harry, Ron and Hermione first meet Professor McGonagall as first-year wizards and witches. Follow the stairs up to the Great Hall, inspiration for the grand Hogwarts Hall.

Visit London Zoo’s Reptile House and see if you have untapped abilities.

It was here that the young Harry had an enlightening conversation with a Burmese Python and discovered he could speak Parseltongue. The language of serpents and an attribute of a dark wizard! What could it all mean?

Start your adventure with campervan insurance

Hopefully when you visit these stunning locations you won’t need to be on the look out for Voldemort or his band of Death Eaters. However, that doesn’t mean you should be unprepared for any eventuality. Campervan insurance is vital in all events!

The team of insurance specialists at Motorhome Protect are here to keep your campervan well covered if something unexpected happens.

Get a quick quote for campervan insurance from Motorhome Protect today.