Throughout the year nature reserves in the UK offer fantastic wildlife viewing opportunities for the intrepid campervan traveller. From the epic journeys of winter migrant birds to rare flowering plants the UK is full of awe-inspiring wildlife.

So, get your insurance for a campervan sorted, your binoculars packed and head out to some of the UK’s best nature reserves for some great adventures this year.

Nature reserves in the UK

There are a whole range of different nature reserves throughout the UK designed to protect and show off our stunning country. Those deemed of national importance in terms of habitats, species or geology are designated as National Nature Reserves (NNRs).

In England alone there are currently 224 NNRs covering an area of over 94,400 hectares – that’s around 0.7% of the country. The largest is The Wash in East Anglia covering almost 8,800 hectares, while Dorset’s Horn Park Quarry is the smallest at 0.32 hectares. In the other countries of the UK, Scotland has 43 NNRs, Wales 76 and Northern Ireland 47.

Below you’ll find just a small selection of the best by region. From the distant Western Isles of Scotland down to the popular south coast of England and from the Norfolk broads in the East across to Northern Ireland in the West, there’s sure to be a location just right for you.

Remember, if you’re taking expensive binoculars, telescopes and cameras on your nature trip then make sure your campervan insurance covers them, too. 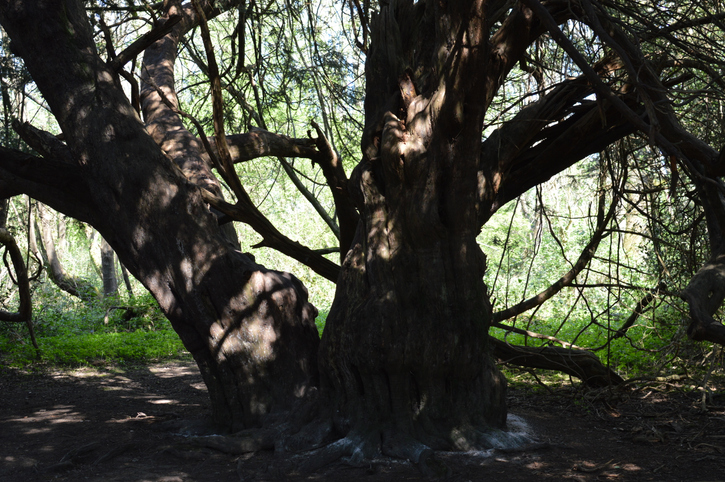 Believed to be the oldest living things in the country, the grove of ancient yew trees at Kingley Vale would have some interesting tales to tell. Some believe they were planted to provide wood for those fearsome English longbows in the Middle Ages. While others claim they commemorate long-dead Viking warriors from the 9th Century. Whatever the truth, this is undoubtedly one of the finest yew forests in Western Europe.

A hike around this spell-binding nature reserve will introduce you to a wide variety of habitats and creatures. The mixture of chalk grassland, scrub, mixed woodland and ancient yew forest provides shelter for many creatures. From those tuneful nightingales to the busy green woodpeckers, red kites and buzzards often seen high above the South Downs.

You might even spot badgers, weasels, stoats, and roe or fallow deer. If you’ve got a really keen eye, you might even see some of the 11 different orchids or 39 species of butterfly that call Kingley Vale home.

Nestled within the stunning wilderness of the Suffolk coast, the family-friendly RSPB Minsmere is the Disneyland of bird watching. There are various landscapes to explore at this one-time base for BBC’s Springwatch, including heathland, grassland, wetland and woodland – all with their own particular rarities on display. Highlights include the large colony of avocets, great bitterns, Dartford warblers, marsh harriers and even otters around the reedbed pools.

The unique geology of the area between Axmouth in East Devon and Lyme Regis in Dorset has resulted in this strange and remarkable nature reserve. If you’re looking for wild and untamed nature then take a walk through this strip of tumbled, wooded coastline.

The Undercliffs have been created by sandstone and chalk rocks, laid down in the Cretaceous period, slipping over older deposits of clay and limestone. The resulting landslides has led to an incredible diversity of plant and wildlife colonising the area and thriving in the warm, sheltered conditions.

Situated right in the heart of England, Rutland Water is a reservoir and at 1,555 hectares is one of the largest man-made lakes in Europe. Built in the 1970s, Rutland Water not only provides drinking water to the surrounding areas but is also home to a popular sports centre and an internationally renowned nature reserve. You’ll find a notable population of majestic ospreys, lapwing and great crested grebes here. It’s of particular importance for its wintering populations of gadwall and shoveler.

Not all nature reserves are in out-of-the-way places. Take, for example, the miraculous 2,400 acre Sutton Park. Located just six miles north of the bustling urban heart of Birmingham it’s one of the largest urban parks in Europe and is designated as a Site of Special Scientific Interest.

Sutton Park is characterised by a rich variety of plants and wildlife living in areas of open heathland, woodlands, lakes, wetlands, and marshes. While cattle and wild ponies graze on the land you might also spot the delicate azure-winged holly blue butterfly, great crested grebes, and even pipistrelle and long-eared bats as night approaches.

This big chunk of North Sea mudflats, salt marshes and sand dunes combine together to make a truly unique place. With stunning Holy Island at its heart, it’s a location in a state of constant change as the tides come in and go out. At Lindisfarne you’re sure to experience an incredible sense of wilderness and tranquillity with its wide sandy beaches, expansive skies and stunning North Sea. From fabulous summer dune flowers to huge numbers of migrating birds there’s so much to see here. It’s easy to see why it has a long history of pilgrimage.

The North West boasts some incredible natural wonders that certainly pull in the crowds whatever the weather. However, if you’re looking for something a little more unknown then visit the magnificent limestone landscape of Smarfdale Gill. The area simply oozes character with open rolling countryside, tiny villages and lots of sheltered locations perfect for wildlife. It’s a great place to spot birds, rare butterflies, wildflowers, orchids, red squirrels and roe deer.

Characterised as Yorkshire's very own Land’s End, this iconic and ever-changing peninsula curves its way beautifully between the North Sea and the Humber Estuary. At over three miles long, but as little as 50 metres wide, the internationally important Spurn Point also has an extensive human history which can still be discovered today. In this wild place, no two days are ever the same.

While you’re here make time to visit the nearby Kilnsea Wetlands Nature Reserve, too.

This island off the coast of Pembrokeshire may be small but its bays, inlets and waters are home to a bewildering array of wildlife. Come to watch seals with their young in late summer/early autumn, experience thousands of Manx shearwaters as they feed their young in July, and of course see the puffins from May through to July. Be aware, if you’re making a special trip, the island is only open to visitors between 1st April – 30th September and can be a very popular destination for photographers and wildlife enthusiasts alike.

Originally a working hill farm nestled in the stunning Cambrian Mountains, in the heart of Wales, the Gilfach Nature Reserve is a spectacular landscape rich in history and wildlife. There are many reasons to visit from pied flycatchers, dippers and redstarts to leaping salmon in the rushing waters of the River Marteg.

Be sure to also pay attention to the rocks themselves here. You might not be aware but over a quarter of the total number of lichens in Wales can be found here – that’s a remarkable 425 species on this reserve alone. Remember, sometimes it’s the smallest living things in nature that make the biggest impact!

Despite being found in the popular Snowdonia National Park, the Rhinog reserve (even at the height of tourist season) is still far enough off the beaten track that you can enjoy nature in peace. The rugged, rocky landscape might not make for easy walking but the views are great and there’s plenty of wildlife to spot. In summer look out for birds like the ring ouzel and northern wheatear. Other resident birds include the rare merlin, peregrine falcons, hen harriers and kestrels. There are also a number of rare plants that you’ll need to watch your step near.

Covering 10 sq km of the River Spey floodplain between Kingussie and Kincraig in Badenoch and Strathspey, this reserve is considered to be one of the most important wetlands in Europe. Here you’ll spot lapwings, snipe, redshanks and curlews as well as roe deer and foxes. In the winter months, look out for swans, geese and waders. 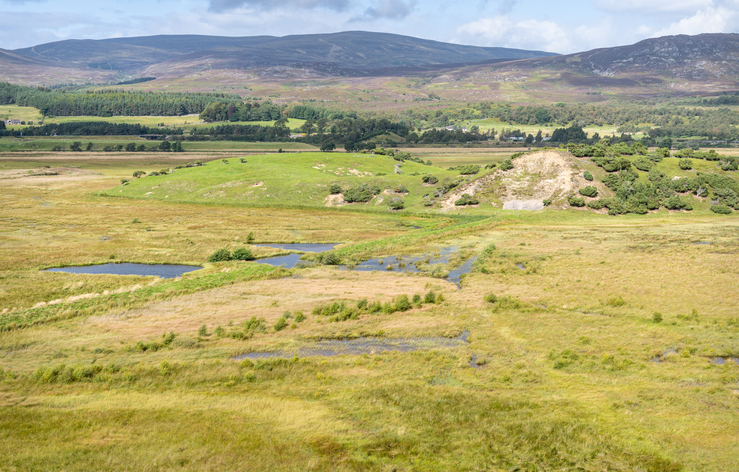 Set amidst the awe-inspiring scenery of the Trossachs, on the eastern shore of Loch Lomond, could there be a more romantic nature reserve in the UK? Here oak woodland rises steeply from the shore before giving way to open moorland and jaw-dropping views. You’ll find red deer and the elusive pine marten here, alongside buzzards, black grouse and even a small number of twites.

The 750-hectare Montrose Basin in Angus is an enclosed estuary of the river South Esk and plays host to one of the largest autumn gatherings of pink-footed geese in the UK. From late September into October, you’ll see thousands of these geese roosting on the water and feeding in the surrounding fields.

You’ll also see large flocks of wigeon ducks whistle on the water, while the mudflats come alive with thousands of redshanks and oystercatchers. Keep an ear out for the evocative calls of curlew that echo around the estuary. Spot fishing osprey between May and September and kingfisher between September and February. You’ll be able to spot seals here all year round.

While you’ll need to leave your campervan behind if you’re making a trip to St Kilda, it’ll be well worth it. With its dramatic landscape of sheer cliffs and sea stacks, it’s easy to see why St Kilda is known as the island on the edge of the world.

The UK’s only World Heritage Site listed for both its cultural and natural heritage, there’s a huge amount to appreciate here. Internationally recognised among bird watching enthusiasts it’s Europe's most important seabird breeding area. Home to nearly 1 million seabirds, if you want to see Atlantic puffins, gannets, guillemots and petrels then this is the place to come.

A cruise around the island will introduce you to sharks, dolphins, whales and even the occasional orca! While on the island itself it’s not just the birds that deserve attention. St Kilda has its own unique wren, as well as a species of mouse which is twice the size of a British field mouse. There are also rare flowering plants and lichens.

Not to forget, St Kilda’s human history which stretches back a mind-boggling 4,000 years into the distant past. Prepare to be amazed on this once-in-a-lifetime trip.

Slievenacloy nature reserve can be found in a picturesque valley in the rolling Belfast Hills, just 10 miles from the capital. A mixture of grassland, meadows, rush and heath it’s an area rich with wildlife. From rare orchids and fungi to hen harriers and red buntings, it’s the perfect place for lovers of flora and fauna.

Protect your vehicle with campervan insurance

If you want to make time for nature you’ll need to first choose the right campervan insurance to keep you on track. Our team will search for the right cover for you from our panel of specialist insurers.

Benefits of insurance through us can include:

Call Motorhome Protect to get a quick quote for campervan insurance today.