Some of the greatest touring locations in the world can be found in Europe, and all within easy reach for UK motorhome owners. And if you’ve got a particular interest in architecture then we’ve got a real treat for you. Our list of 10 top European destinations for architecture buffs is sure to give you some inspiration for your next adventure.

From lounging around at street cafes to hitting the art galleries and cultural highlights, Europe is a wonderful place to travel – provided you’ve got the right motorhome insurance. Having the right cover means that enjoying your next European Grand Tour is sure to be no effort at all.

If you’re interested in architecture then there’s no doubt you’ll have heard of the brilliant Catalan architect Antoni Gaudi. And there’s really no better place in the world to experience his dream-like, almost organic constructions than in Barcelona. Gaudi’s many individualistic works are dotted around the city but his most famous has to be the church of the Sagrada Familia. 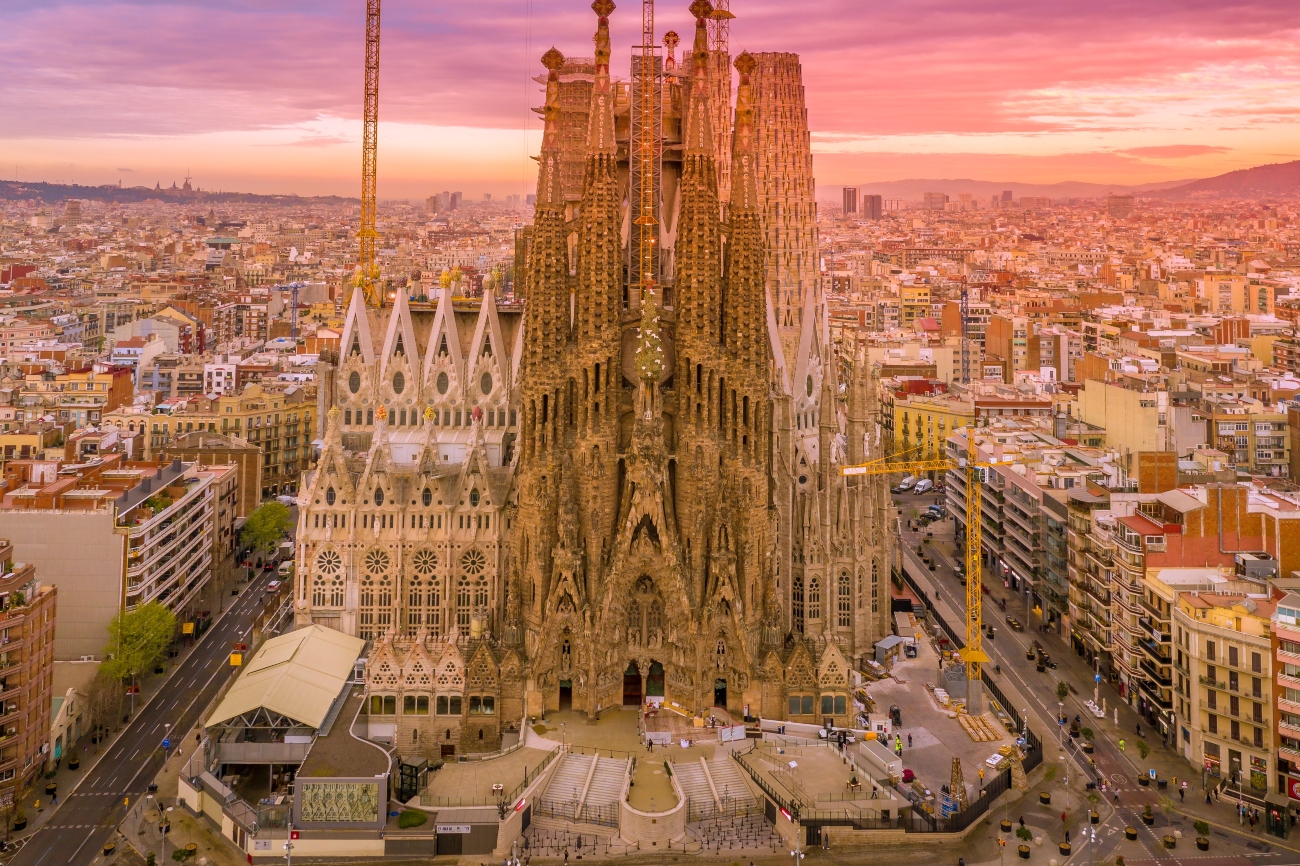 Started back in 1892, the church is the most-visited monument in Spain but hasn’t even been finished yet! Unfortunately, recent hopes that it would be completed in time for the 100th anniversary of his death in 2026 have been delayed due to the COVID-19 pandemic.

Gaudi’s modernist mark can be seen written all over the city in several stunning buildings. These include the UNESCO World Heritage Site called Parc Guell, a garden complex that contains a collection of his work and his former home. Other must-visit points are Casa Vicens, one of the very first Art Nouveau buildings in the world and Gaudi’s first big project, and Casa Mila, perhaps the most imaginative residential building in the history of architecture.

And remember, driving in Spain isn’t quite the same as in the UK. Have you thought about what you need to know before your next Spanish road trip? If you’re planning on holidaying abroad then you’ll surely need motorhome insurance that covers you across the EU. Call the helpful team at Motorhome Protect and discuss your next European break.

With some of the oldest and most famous buildings in Europe as well as stunning modern and contemporary architecture, Rome has to be near the top of any list of architectural delights.

The most prominent example of Ancient Roman architecture has to be the Colosseum. It was the largest building of its type at the time of its construction in 80AD, and its ruins are still an impressive sight today. Next up is the Pantheon, a former Roman temple which since 609AD has been a church.

It’s undoubtedly one of the best preserved of the many ancient buildings in Rome. As a feat of engineering, it really is superb. Indeed, almost two thousand years after its construction the Pantheon’s dome is still the world’s largest unreinforced concrete dome. Other ancient buildings of interest include the Roman Forum, the Domus Aurea, Trajan’s Column, the Catacombs, the Circus Maximus, the Mausoleum of Augustus and the Arch of Constantine.

But Rome’s architectural history didn’t just stop with the fall of the Roman Empire. There are also superb Renaissance masterpieces, fabulous Baroque-heavy palaces, and superb examples of neoclassical architecture.

If you have more contemporary sensibilities then visit the Auditorium Parco della Musica designed by Renzo Piano or the revolutionary Chiesa Dio Padre Misericordioso designed by Richard Meier in the Tor Tre Testa suburb.

As the Czech Republic’s spellbinding capital, Prague has an array of well-preserved buildings that reveal over a thousand years of eventful history. Fortunately for Prague and for us, many of these architectural gems remain intact because the city avoided much of the rebuilding suffered by countless European capitals in the 18th and 19th Centuries. Perhaps even more importantly, it also avoided the tragic fate of many cities during World War 2.

Walking through Prague’s cobbled lanes and hidden courtyards today is like exploring a museum of architecture under the open sky. As the largest urban historical centre listed on the UNESCO World Heritage List it’s a fabulous place to get up-to-date on architectural styles.

If you want to take a break from driving, why not take a river cruise and relax as you float past the best in Romanesque, Gothic, Renaissance, Baroque, Rococo and Classical styles? You can even spot interesting Communist Era architecture such as the Hotel International Prague, too.

Must-visit sites include the sprawling Prague Castle Complex that’s home to many landmarks including the St. George’s Basilica, St. Vitus Cathedral and the Old Royal Palace. Another popular spot, for those who like their buildings quirky, is the Dancing House designed by Croatian-Czech architect Vlado Milunić alongside Frank Gehry.

Austria is well known for its wealth of architecture, but if you want to see the best of the best then you must spend some time visiting the historic city of Vienna. Here you can devour a harmonious mix of styles ranging from Classicism to Modernism. However, it’s the magnificent Art Nouveau masterpieces that really steal the show.

Much of the credit for this beauty has to be given to architect, designer and urban planner Otto Wagner whose genius has had a huge impact on how Vienna looks today. He contributed many landmarks to the city and is recognised as one of the fathers of modernism in architecture.

His buildings such as the Austrian Postal Savings Bank, the Pavillion Karlsplatz and the Kirche am Steinhof are seen as key to Viennese Modernist and Art Nouveau architecture. Simply magnificent in every way.

Amsterdam has a fascinating mix of styles to suit any taste. If you like your buildings to make a statement then the world-famous Royal Palace is the largest and most prestigious in the city dating from the Dutch Golden Age in the 17th Century.

The iconic canal houses with their ornate facades and gables also date from this period and are really something to behold – particularly when viewed from the water or a canal-side café. 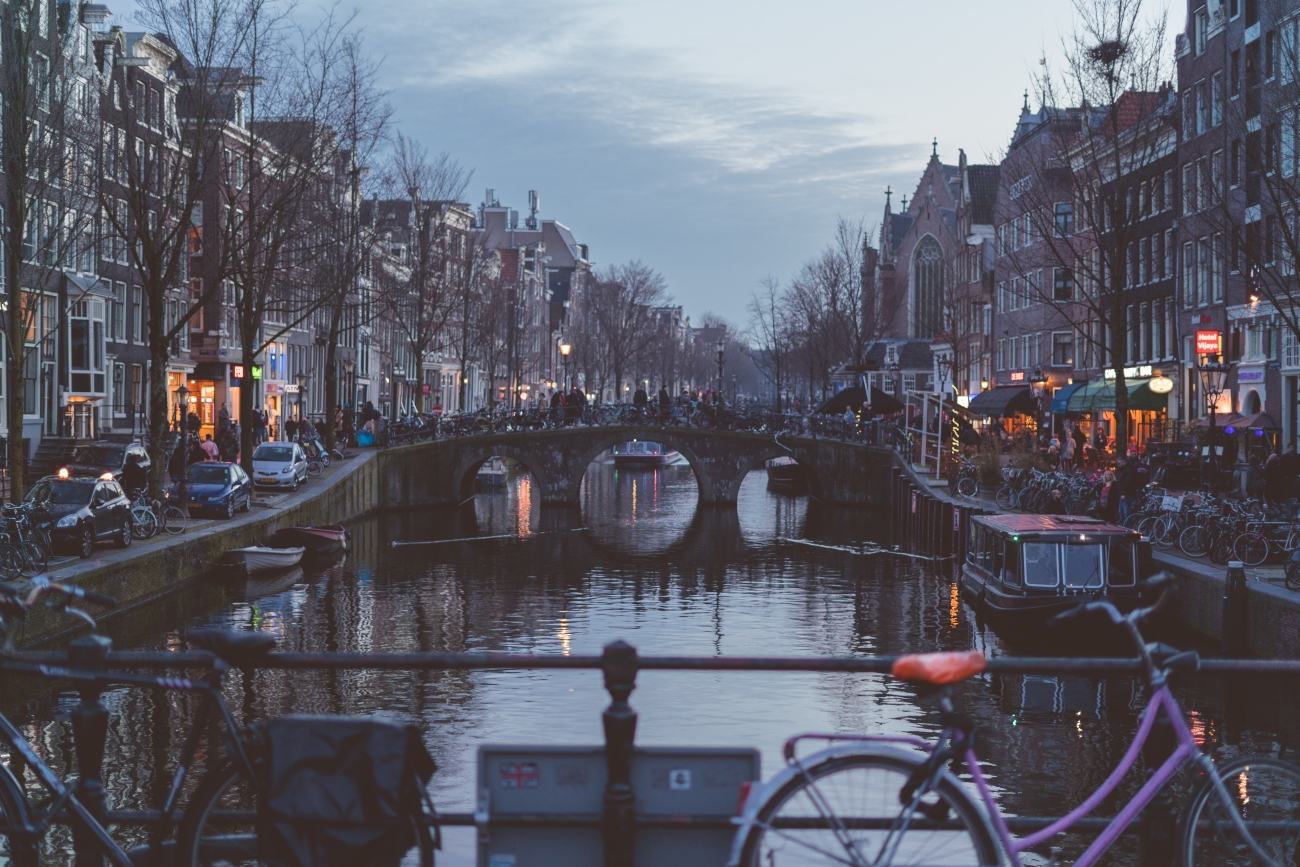 The Art Deco splendour of the Tuschinski cinema is worth searching out for its opulent foyer featuring beautiful carpets and special lighting effects. The city has also given its name to a specific architectural school called the Amsterdam School which specialises in sculptural brickwork.

Prime examples of this movement are Museum Het Schip, Het Sieraad, and Het Scheepvaarthuis. Don’t forget to appreciate at least some of the more than 1,200 bridges that criss-cross this picturesque city.

But that’s not to forget that Amsterdam also has some outstanding contemporary buildings. These include Renzo Piano’s ship-like NEMO Science Museum, and Benthem Crouwel’s ultramodern Stedelijk Museum extension. Yes, they have noticed it looks like a massive bathtub.

Back in medieval times, Bruges was the beating commercial heart of Europe, and much of its beauty today is a result of that time of great wealth. Any visitor will soon be mesmerised by its elegant mix of canals, cobbled streets, parks, and well-preserved medieval buildings dating from the 12th to 15th Centuries.

It’s easy to see why the historic city centre is an UNESCO World Heritage site. Must-see highlights include the impressive 115-meter-tall Church of Our Lady, the Belfry of Bruges, the Basilica of the Holy Blood, the Stadhuis and the Provinciaal Hof. Don’t forget to get your picture taken at the Instagram-ready Quay of the Rosary.

If you’re looking for further tips on where and when to visit, check out our guide to planning a motorhome trip to Belgium.

Situated so close to the border with Germany, the French city of Strasbourg has a history which runs very deep and is perhaps best understood by exploring its buildings.

Undoubtedly the most magnificent building to visit is the sandstone, Gothic marvel that is Strasbourg Cathedral and its famous astronomical clock. But the surrounding Petite France area is equally beautiful with its mix of Rhineland black and white timber-framed houses. Just north-west of the cathedral is the famous Maison Kammerzell.

This fine old burgher’s house is rightly considered a gem of Alsatian architecture. If you go inside, be sure to marvel at the lavish frescoes painted on all floors by the Alsatian painter Leo Schnug.

Often seen as an Eastern European rival to Paris, Budapest has an absolutely breath-taking mix of architectural styles and historical heritage. From the ancient ruins of the Roman settlement of Aquincum, the neo-Gothic Parliament, the majestic 700-year-old Matthias Church and the iconic Szécheny Chain Bridge, there’s almost too much to take in.

Fortunately, that just gives you another excuse to return. Another must-visit is the Royal Palace (reached via cable car) and its fairytale-like Fisherman’s Bastion viewing terrace. 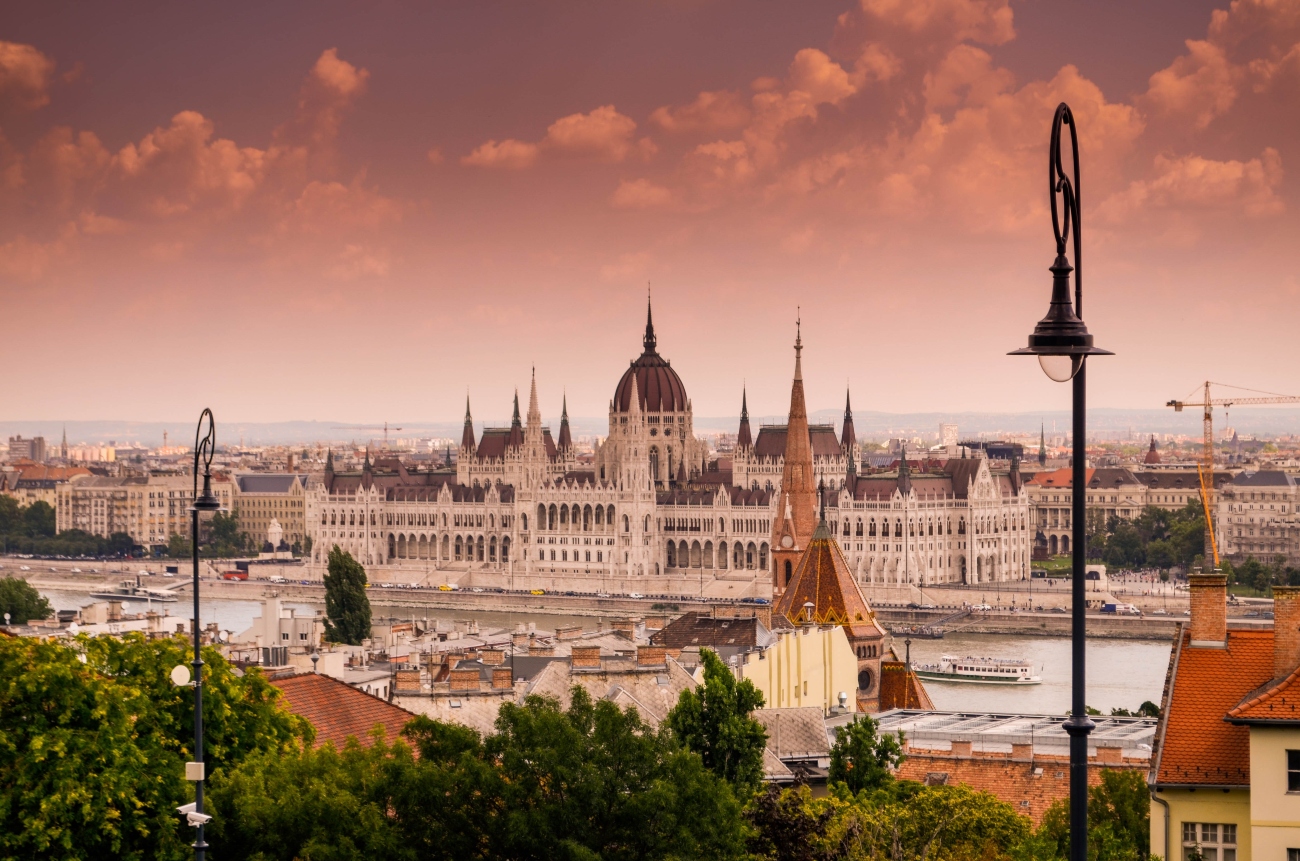 Despite being a comparatively young European capital Helsinki has a gorgeous range of buildings covering many flavours of architectural practice, all showcasing the beauty of nature and local craftsmanship. Reflecting Finland’s medieval heritage, the Kansallismuseo’s grey granite stonework and green-tinged copper roof perfectly complement its sumptuous art nouveau interiors.

Helsinki’s own variety of Nordic classicism can be seen in the Yrjönkatu Swimming Hall designed by architect Väinö Vähäkallio in 1928. While the stunning Temppeliaukio Church (also known as the Church of the Rock) was built directly into the surrounding granite bedrock to create a truly unique space.

And it’s not only a favourite of architecture aficionados the world over. The unworked rock surfaces of its walls provide fantastic acoustics for concerts. It really has to be seen and heard to be believed.

But it’s the work of modernist architect and designer Alvar Aalto that the city has become most famous for. Fans of the Finnish master are spoiled for choice in Helsinki. With the stunning white marble and black granite Finlandia Hall, the gorgeous interior of the Restaurant Savoy and many more on show.

If you are in Helsinki then make sure to visit the Oodi Library. Located in the Helsinki Cultural District facing the Finnish Parliament, the world’s most beautiful library incorporates a café, restaurant, cinema, recording studio and 3D printing room. It really sets the highest standards for libraries of the future. A book lover's idea of heaven on earth.

Architecture isn’t always about big statement projects, big names, or big ideas. That’s why the small Bavarian town of Rothenburg makes it into our top 10 list. One of Europe’s best-preserved walled towns, it’s helpfully situated on the Romantic Road about halfway between Frankfurt and Munich – just right for any visitors in a motorhome.

Walking through these remarkable streets is like living in your very own fairytale. Walk the cobblestone streets and marvel at the countless timber homes with gabled roofs, the beautiful medieval architecture, and the virtually undamaged 14th Century town wall.

Please make time for St James Church and its 500-year-old, Holy Blood altarpiece carved by Tilman Riemenschneider. Just walk around and breathe in all the atmosphere.

Motorhome insurance for your EU adventures

Whenever you drive your motorhome abroad it can be a bit of a challenge – particularly if you’re not used to it. So always make sure you’ve got adequate insurance cover for your entire trip.

Exploring these architectural gems around Europe is the perfect excuse to use your motorhome throughout the year. But this also means you could find yourself on unfamiliar roads in unfamiliar conditions. And perhaps more likely to suffer an accident or damage.

Using our panel of insurers, the helpful team at Motorhome Protect searches out motorhome insurance that’s just right for you and your wonderful home on wheels.

Cover arranged by us can include benefits such as:

We can also provide quotes for customers with claims and convictions.

Call Motorhome Protect and get a quote for motorhome insurance today.