From day trips to week-long adventures, a campervan owner can do it all – and at a fraction of the cost of other holidays. If you fancy a UK break this year then you won’t go far wrong than the south west of England. And in particular the world-famous Jurassic Coast.

It’s a bit off the beaten track with a fair dose of quirky charm and huge amounts to keep everyone happy – no matter what the level of adventure you’re looking for.

And with your transport and accommodation sorted, what better way to explore than at the wheel of your cool camper? That is, once you’ve got your insurance for your campervan set up!

If you want to discover all this wonderful part of the world has to offer, then follow our Motorhome Protect tour itinerary to get you started.

What is the Jurassic Coast?

If you’re in the mood for a wonderfully diverse and stunning landscape with a globally important geological story to tell, then the Jurassic Coast is it.

An UNESCO World Heritage Site since 2001, it boasts an incredible display of rocks, fossils and landforms.

The Jurassic Coast remains England's only natural World Heritage site, ranked alongside natural wonders such as the Great Barrier Reef and the Grand Canyon. It really is that good!

Running from Orcombe Point in Exmouth, Devon, the Jurassic Coast continues for 95 miles to Old Harry Rocks, near Swanage, Dorset.

The route takes in four distinct geographic regions – East Devon, West Dorset, Weymouth & Portland and Purbeck. Every one of which contains its own unique towns, villages and natural landscapes.

The coastline is made up of rocks spanning 185 million years of the earth’s geological history, covering the Triassic, Jurassic and Cretaceous periods.

So, if you find yourself relaxing on one of the many lovely beaches, remember the earth’s history is all around you!

If you’re planning a trip along the Jurassic Coast, then a great idea is to visit some of these incredible places. There’s really so much to discover! 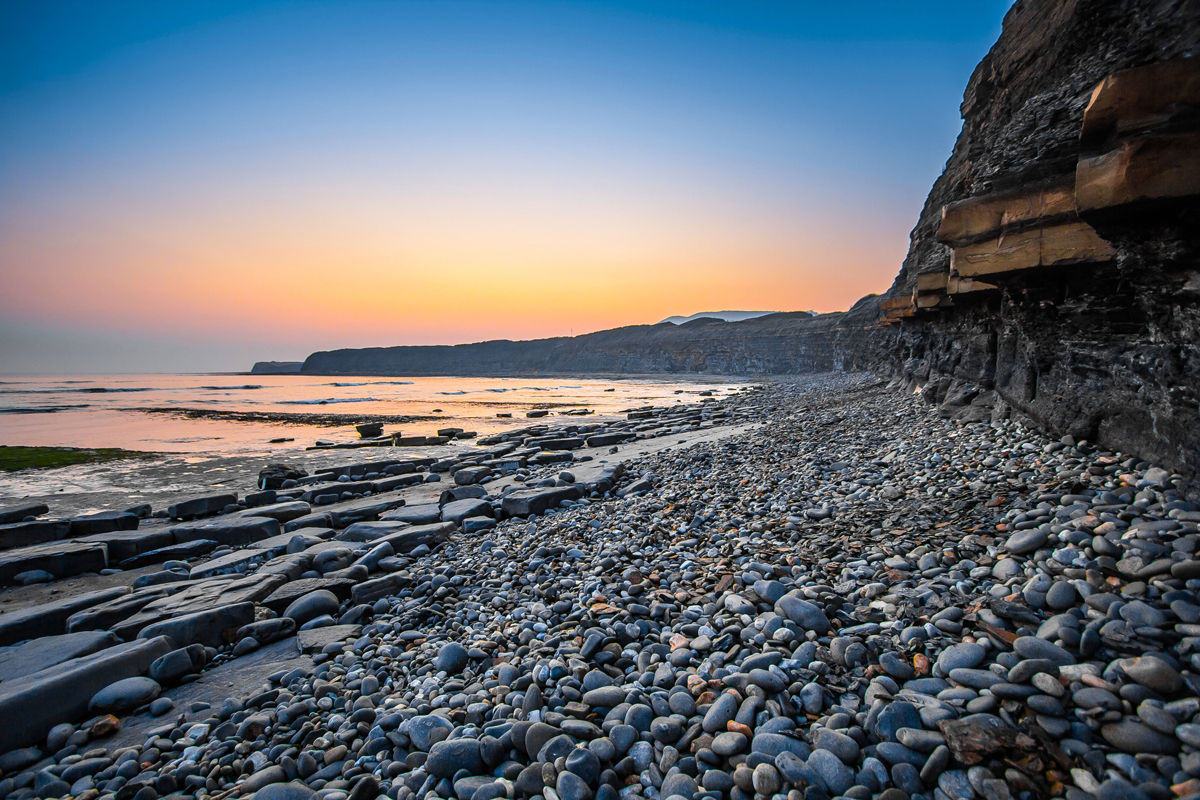 With a history dating back to Roman times, Exmouth is a fitting start to any trip along the Jurassic Coast.

Lying on the east bank of the mouth of the River Exe it’s easy to see why the town has been a popular destination for holidaymakers since the late 18th Century.

With two miles of golden sands, rock pools and a wealth of watersports on offer, it’s a great place for summer adventures.

If you’re a keen nature watcher then the nearby Exe Estuary is an internationally important haven for birdlife.

Bounded on each side by spectacular Triassic red sandstone cliffs, the tranquil town of Budleigh Salterton lies just four miles east of Exmouth in an Area of Outstanding Natural Beauty.

The quaint thatched and white-washed cottages leading down to a pebble beach have played host to such cultural luminaries as Noel Coward, PG Wodehouse and John Millais – while Sir Walter Raleigh was born just a couple of miles inland.

Be sure to pay a visit to the wonderfully quirky volunteer-run Fairlynch Museum – it hosts one of the most important costume collections in the country.

As the chief seaside resort of the East Devon coast, Sidmouth has much to offer. Set amidst a shelf of crumbling red sandstone and with a backdrop of the luscious green hills of the Sid Valley it’s a photographer’s dream.

Architectural buffs will also have much to keep them busy. As the cream and white coloured town lays claim to nearly five hundred buildings of special historic or architectural interest.

There are many fine homes dating from the Georgian period giving the town a wonderfully timeless atmosphere.

This is a cliff-backed shingle and sand strip from which a wooden staircase ascends to the Connaught Gardens in the cliffs above. 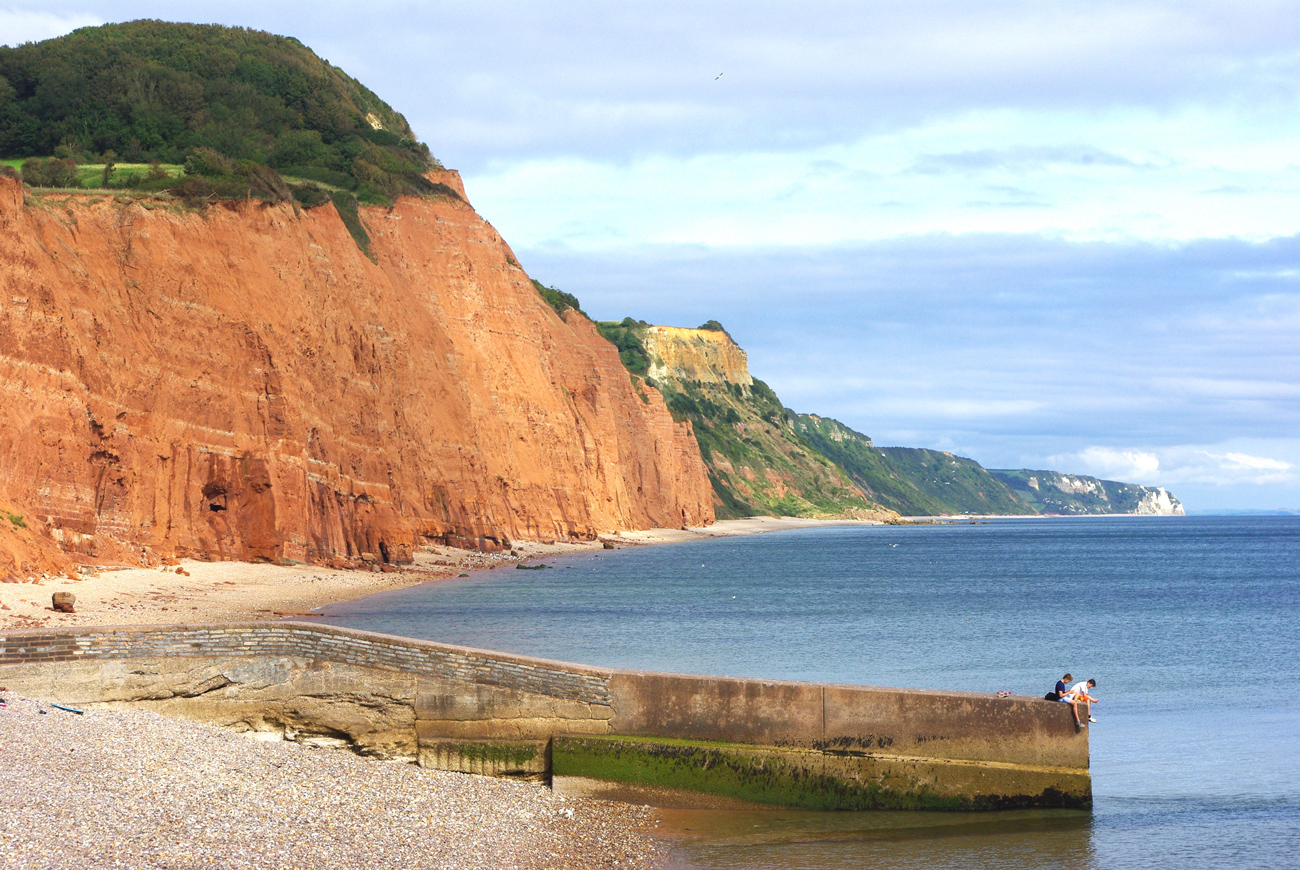 After the striking red sandstone cliffs of the rest of the East Devon coast you might be surprised to encounter the picture-perfect fishing village of Beer.

Huddled within a small sheltered cove, the village is dominated by gleaming white cliffs of chalk on either side. If you can avoid some of the crowds that descend upon Beer in the summer then you’re in for a treat.

During quiet periods it seems unchanged from the days of dangerous smugglers and brave customs men!

If you want to see where smugglers hid their contraband then take a tour of the vast, cathedral-like Beer Quarry Caves.

As you cross from East Devon into West Dorset the first town you come to is the historic and oh-so-photogenic Lyme Regis.

Sheltered snugly between steep hills, the narrow streets of this charming town are a popular destination for any visitor to this part of the Jurassic Coast.

The birthplace of perhaps the world's most famous fossil hunter, Mary Anning, it has a fascinating history stretching all the way back to the 8th Century.

There’s lots to see and do here. Start off with visits to the town’s excellent Lyme Regis Philpot Museum, Dinosaurland and the interesting aquarium found on the historic Cobb.

Then set off on walks along the coastline in both directions. To the west lies the Undercliffs National Nature Reserve, a fascinating jumble of overgrown landslips and one of the great wilderness areas of southern England.

East of Lyme Regis you’ll find Jane Austen’s favourite resort, Charmouth. At low tide you can walk all the way along the beach from Lyme Regis to this attractive seaside village.

It’s a beautiful walk and the beach was the only UK entry in National Geographic's 21 Best Beaches in the World 2017.

However, if you’re planning to do this, please check the tide times in advance as it’s easy to become cut off by the incoming tide. You don’t want to have to call out the RNLI lifeguards for rescue!

The large shingle beach and the Charmouth Heritage Coast Centre on the seafront are simply heaven for anyone fascinated by fossils and natural history.

The Centre not only has a superb display of local fossil finds; it also runs regular fossil hunting walks. Book ahead as these can be extremely popular.

Walking east from Charmouth along the Dorset Coast Path you’ll enter a large countryside area owned and managed by the National Trust.

The Golden Cap Estate is home to some of the best walking in the area and makes a perfect spot for a summer picnic. It also contains the mysterious lost village of Stanton St Gabriel.

However, the highlight of the area is the climb up to the headland of Golden Cap. This brilliant outcrop of tawny-coloured sandstone is crowned with gorse and at 190 metres is the highest point on the south coast of England.

Bring your camera for panoramic shots in all directions – from Dartmoor in the west to Portland in the east.

Just a short one-mile detour inland brings you to one of Dorset’s finest and prettiest villages, Abbotsbury.

Full to bursting with cottages made of tawny ironstone and thatch, the village contains evidence of human settlement stretching back thousands of years to Neolithic times and is overlooked by an Iron Age hill fort.

For such a small place, there’s lots to do here. The 600-year-old, world-renowned Abbotsbury Swannery is home to over 600 of these majestic creatures.

It’s the only place in the world where you can walk through the heart of a colony of nesting Mute Swans.

There’s also the sub-tropical gardens and the spectacular views towards West Bay and Golden Cap from St Catherine’s Chapel above the village.

If you’re looking for somewhere larger to explore then head further inland to the county town of Dorchester. This pleasant town is centred around mostly 17th Century and Georgian buildings.

Although its origins date back to Roman times when Durnovaria was founded here in about 70AD. Indeed the pretty shopping streets still follow the original Roman layout for the town.

Walking around the town, you’ll quickly become aware of other historic and literary connections.

Novelist Thomas Hardy was born and spent much of his life here while the notorious 17th Century ‘hanging judge’ Judge Jeffreys held his Bloody Assizes here.

We recommend a visit to the engrossing Dorset County Museum and the Iron Age Maiden Castle, one of southern England’s finest prehistoric sites on the edge of town. 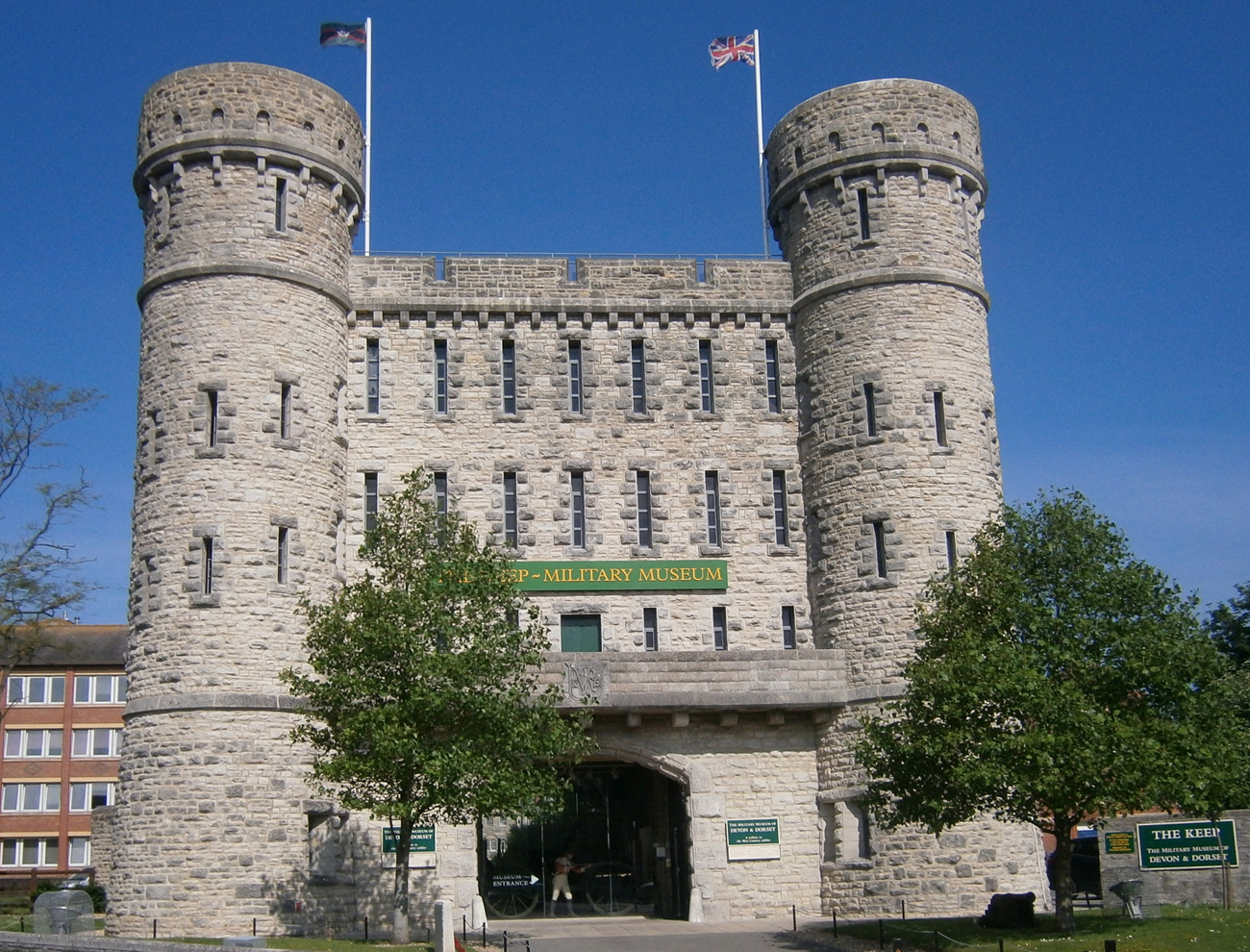 Amongst all the natural wonders of this coastline perhaps one place stands out above all others for its strange, inspiring and elemental atmosphere.

Chesil Beach is an 18-mile-long natural shingle barrier beach stretching all the way from West Bay to the Isle of Portland – in places it is up to 15 metres high and 200 metres wide!

For much of its length it’s separated from the mainland by an area of shallow, saline water called the Fleet Lagoon.

The beach and lagoon are of international importance and home to nearly 300 species of birds, over 30 species of butterflies and 720 species of moths.

However, it’s popular with anglers and its wild, uncommercialised atmosphere is a powerful remedy to some of the busier south coast resorts.

Speaking of popular seaside resorts, the town of Weymouth is up there with the best.

For hundreds of years, the town’s sheltered, shallow waters and golden sands have been welcoming holidaymakers looking for a spot of sun whatever the time of year.

Apart from the family-friendly beach and seaside attractions it’s also a popular spot for sailors and those interested in sea life.

Windswept and treeless the stark beauty of the Isle of Portland can be found on the easternmost section of the Chesil single.

This isolated location is the Jurassic Coast’s most southerly point and a joy to explore on foot.

It’s perhaps most famous for the hard white limestone that’s been quarried here for hundreds of years.

Portland stone has been used for many landmark buildings including St Paul’s Cathedral, Buckingham Palace and the UN headquarters in New York.

One of the most famous and most photographed spots along the Jurassic Coast is the iconic Durdle Door.

This natural limestone arch rising out of the sea is a popular spot for both geologists and casual sightseers.

Most people approach it via an uphill walk from the car park at nearby Lulworth Cove. However, you can avoid the steep climb if you’re staying at the family-owned Durdle Door Holiday Park. 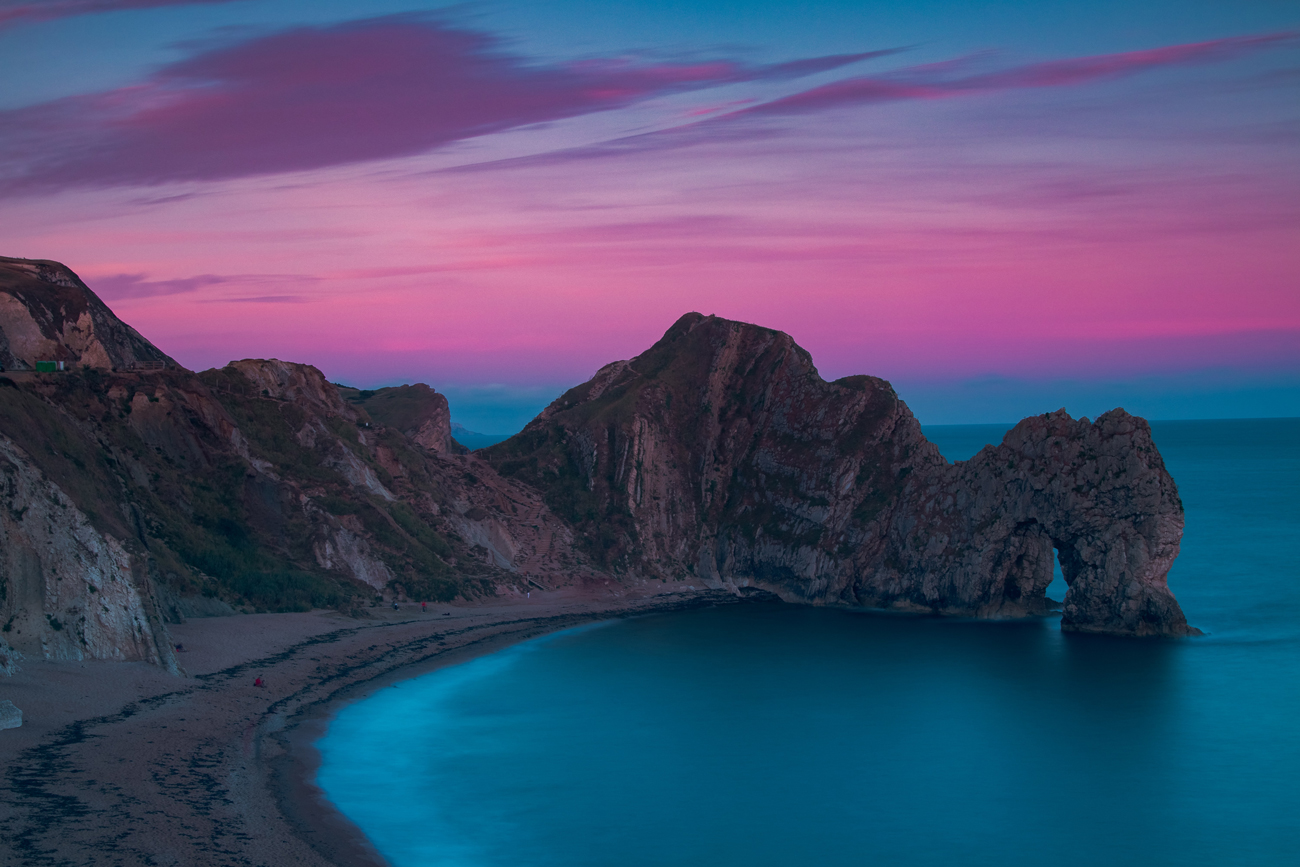 The coastal footpath joining Durdle Door to Lulworth Cove is one of the busiest in the south west and sees hundreds of thousands of walkers every year.

The walk takes around 30 minutes up and down a steep, but very beautiful, path. Lulworth Cove itself is a perfect sheltered spot ideal for sea bathing.

Purbeck’s largest town is the traditional and family-friendly Swanage. In a sheltered position with a gently shelving sandy beach the area has a bustling but easy-going charm.

The town’s Swanage Heritage Railway is a great way to leave your campervan behind and explore the area.

Wherever you leave your campervan while adventuring along the Jurassic Coast you’ll need campervan insurance to protect it and its contents.

As the easternmost point of the Jurassic Coast, the dazzling white chalk cliffs of Old Harry Rocks make the perfect end to any coastal tour.

Choosing campervan insurance from Motorhome Protect is the ideal way to get your Jurassic adventure off to the perfect start.

Our friendly team of insurance specialists will find you the cover you need at a great price. Benefits of campervan insurance arranged through Motorhome Protect include:

Call Motorhome Protect to get a quote for campervan insurance today.