It's been over 200 years since the death of one of England’s most revered novelists Jane Austen. Whether or not you’re read any of her six marvellous books or watched one of the countless TV or film adaptations, there’s no doubt you’ll at least be aware of her work. To pay tribute to one of the nation’s most beloved authors and her creations, the team at Motorhome Protect have put together a list of some of the best places to visit to be moved by her life and work. Who knows, it might even inspire you to pen the next great English novel!

Travelling around the UK during Austen’s time was not what it is today. But while many of the hazards you might have encountered have gone, it’s still vital to have motorhome insurance. How else can you protect your vehicle when travelling the highways and byways of this glorious land?

So which locations should you put on your list for a Jane Austen-inspired road trip? Let’s take a look.

The county of Hampshire is a hub for Jane Austen fans as it contains her birthplace, final resting place and was the area she spent her most prolific writing years. The village of Chawton was her home from 1809 until her tragically early death at the age of 41 in 1817. It was here she wrote and revised almost all of her six books including her first, Sense and Sensibility.

The best place to start your tour is at the Jane Austen’s House Museum, an unassuming plain red-brick building in the centre of the village. The museum contains a rare collection of Austen artifacts, including first editions of her works, her writing table and a patchwork quilt made by Jane, her beloved sister Cassandra and their mother.

Her brother Edward lived at the nearby Grade II* listed Elizabethan manor house. 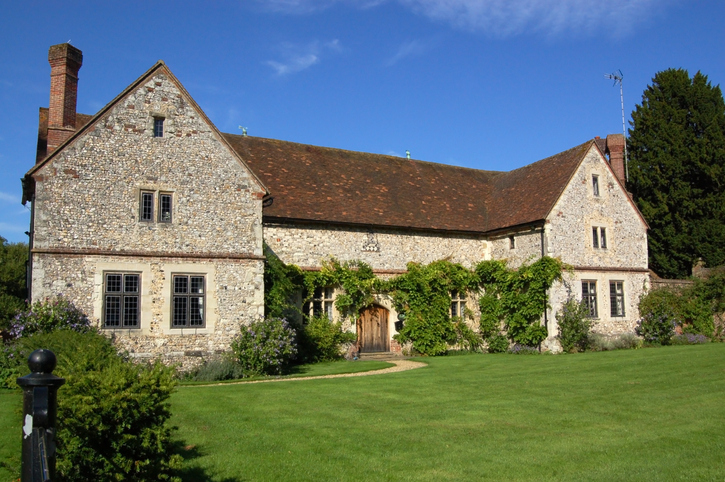 which is also well worth a visit. There are lots of great special events put on at both of these fascinating venues. In the past these have included Regency-style music, dining, talks, workshops and guided walks. Not to mention Victorian cricket and a Regency Ball! Swooning at a potential Mr Darcy is purely optional.

Born here in 1775, Austen lived in the idyllic village of Steventon for the first 25 years of her life. The seventh of eight children, her father served as the rector here and in nearby Deane. Unfortunately, the rectory where the family lived was demolished shortly after Austen’s death in 1817. Although a lime tree planted by Austen’s elder brother James still marks the spot where it stood, a well is the only visible remains of the house.

Today the 13th Century Church of St Nicholas where Austen worshipped, remains almost unchanged from those days. Its thick mottled stone walls and medieval wall paintings would have been so familiar to Austen and she no doubt took inspiration from it for some of her novels’ many wedding scenes. Indeed, it’s easy to imagine Austen running through the surrounding fields like that sensitive soul Marianne Dashwood in Sense and Sensibility.

You’ll find memorial tablets to James, who took over the parish from her father, his two wives and some of Austen’s relations. Their graves can be visited in the peaceful churchyard.

The last of our Hampshire stops is the handsome cathedral city of Winchester. Here you’ll find the stunning Winchester Cathedral where Austen was buried in 1817. Her simple grave can be seen in the north aisle of the nave. While her original memorial stone recorded her personal virtues and stoicism it didn’t mention her novels (her literary fame came later).

Her nephew Edward redressed this omission with a brass plaque installed in the north side aisle in 1872. You can read the plaque along with an illustrated exhibition detailing Jane Austen’s life, work and death in Hampshire displayed next to her grave. There’s also a memorial window to see, too.

Winchester isn’t just a great place for Austen fans who want to pay homage to one of Britain’s most beloved authors. It’s a fantastically well preserved city that’s well worth the trip in your motorhome itself.

Austen is known to have visited the ancient town of Lyme Regis on several occasions during her life. Indeed, she even wrote to her sister Cassandra describing a trip to an evening ball at the town’s Assembly Rooms. She must have collected much information on the charming seaside town when she was staying here as her last completed novel Persuasion is set in Lyme Regis.

There’s lots to see and do here. Perhaps take a guided walking tour of Lyme Regis and the Jurassic Coast to help you follow in the footsteps of this literary icon. When you’ve had enough of Austen, visit the town’s excellent Lyme Regis Philpot Museum and the fascinating aquarium found on the historic Cobb.

If you’re venturing into deepest, darkest Dorset, remember to have motorhome insurance in place for any accidents or breakdowns.

Our motorhome tour doesn’t just take us to places Austen lived and loved, it also includes some of the locations used in film adaptations of her books. First up is the 18th Century landscaped garden at Stourhead in Wiltshire used in the 2005 film of Pride and Prejudice. It was at the stunning Temple of Apollo, set above the tranquil lake waters, that Mr Darcy made his first and futile proposal to Keira Knightley’s Lizzy.

One of the UK’s finest landscape gardens, we can thank gentleman gardener Henry Hoare for Stourhead’s classical temples and stunning views. Watch the film and replay the scenes in real life, or simply enjoy a lovely wander around the gardens.

Part owned by the National Trust, the gardens and the Grade I listed Palladian mansion overlooking them have to feature on any Austen-inspired tour. With the calm and cooling waters of the lake, pathways winding beneath magnificent trees and even a hidden grotto, Stourhead’s garden is the ideal place to spend a summer afternoon.

There are few more historic locations in the country than the stunning south-west city of Bath. The city is an architectural and cultural gem as well as the perfect place to really get to know Austen and her works. She lived here somewhat unhappily between 1801 and 1806 and the city made a big impact on her work. Indeed, the city’s perfectly preserved Georgian architecture remains largely unchanged from the streets depicted in the pages of Northanger Abbey and Persuasion.

If you really want to follow in the footsteps of Austen and her characters then it’s easy to do so with a walking tour of the city. You can also stop by the Jane Austen Centre, located in a stunning Georgian townhouse in the heart of the city just a few doors away from where she once lived. It offers a wonderful snapshot of life during Regency times and is home to an fabulous exhibition of costumes, manuscripts, and film clips to bring Austen’s world to life. Have fun dressing up, tasting Regency food, writing with quill pen and ink and even taking a selfie with a Jane Austen waxwork!

Sip some of the 15 varieties of loose leaf tea and nibble on delicious homemade cakes and finger sandwiches while contemplating your next trip.

If you’re visiting in September then make time for the Jane Austen Festival, where you'll see many Austen enthusiasts dressing in Regency costumes and celebrating her remarkable life and works. The best day to visit is the first Saturday, when the festival officially ‘opens’ with the Regency Costumed Promenade through the streets. Led by a Town Crier and accompanied by soldiers and sailors, why not get dressed up and take part in the colourful proceedings.

If you’ve seen the BBC’s excellent adaptation of Pride and Prejudice then you’ll undoubtedly be familiar with this picturesque 13th Century Wiltshire village. It depicted the village of Meryton and it was here that the Bennet sisters shopped for the most fashionable bonnets, sought out the latest gossip from their Aunt Philips, and dreamed of attracting the attention of any handsome officer – in particular that charming rake Mr Wickham. 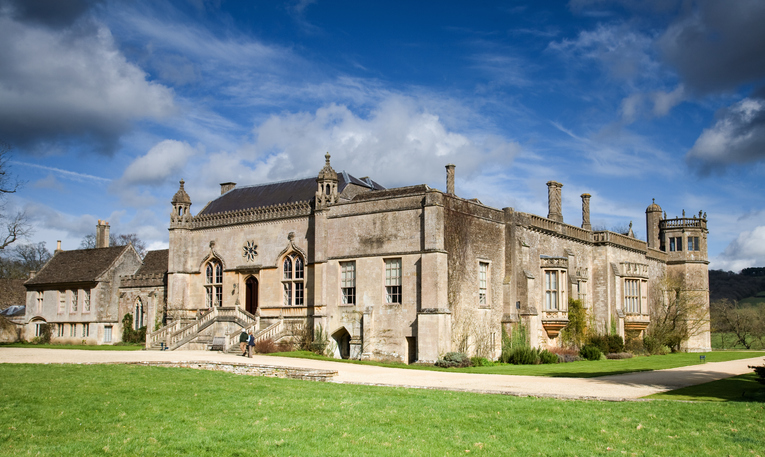 have often been used as filming locations, not just for Pride and Prejudice but also adaptations of her other works such as Emma and Sense and Sensibility. If you’re interested in visiting any of these then it might be worth investing in a National Trust membership for free entry. They have some great motorhome and campervan sites situated up and down the country.

Heading east brings us to the instantly recognisable Grade I listed Highclere Castle. Originally built in 1679, Austen visited the Lord Carnarvon-owned grounds and wrote of her time here in a letter to her sister Cassandra in 1800. It was largely renovated in the 1840s and is perhaps better known today as the main filming location for the ITV drama series Downton Abbey.

Some Austen scholars believe that Austen based Mr Darcy’s fictional estate of Pemberley on the palatial Chatsworth House in Derbyshire. And considering that Austen wrote much of Pride and Prejudice while staying in nearby Bakewell, it seems like too much of a coincidence for it not to be true.

Austen declared ‘there’s no finer county in England than Derbyshire’, so it seems fitting that so many film adaptations have featured the region. And if you’re a lover of Pride and Prejudice then Chatsworth House is a must-visit. Here visitors can explore the house’s 30 stunning rooms, wander through the 105-acre garden or marvel at the extensive private art collection.

Scenes from Pride and Prejudice were also filmed at the iconic Haddon Hall. Yet another beautiful Derbyshire stately home beloved by film directors. If you’re looking to explore Derbyshire further then read our guide to exploring the stunning Peak District. From the quirky but stunning village of Matlock Bath to the heights of Mam Tor there’s so much to see and do in this beautiful part of the country.

Still on the subject of Pride and Prejudice, the 1995 BBC series used three different locations for the Pemberley estate. One of the most famous has to be Lyme Park in Cheshire where exterior shots were completed. It was here they shot the now infamous ‘lake scene’ in which Mr Darcy, played by soon-to-be sex symbol Colin Firth, emerged fully clothed and dripping from Pemberley’s beautiful lake – setting hearts a flutter across the nation and angering Austen-purists at the same time. After all, the scene wasn’t even a part of the original story! Still regarded as one of television’s most recognisable backdrops if you’re looking for an Insta-ready Austen location then this is most definitely it.

If you want to really get to know Jane Austen and her world then you really need to read all of her other novels. However, carting around all six, not to mention all the other books inspired by her work, can be a bit of a chore. Why not invest in an e-reader then you’ll easily be able to carry it and a whole library of other Austen-related works for your reading pleasure!

If you do take such expensive items on your trip, make sure you have motorhome insurance from Motorhome Protect. Our cover protects not only your vehicle but also its contents.

Get some sense and sensibility with Motorhome Protect

As Austen might have said, it’s a truth universally acknowledged that a motorhome will take you to many wonderful locations – but only if you have the right motorhome insurance.

Motorhome insurance arranged by our dedicated team comes with a range of benefits including:

Get a quick quote for motorhome insurance today.