Exploring the Peak District by campervan

Ever since its designation in April 1951 as the UK’s first national park, the Peak District has been attracting visitors from far and wide.

With its rugged landscape covering nearly 1,500km and featuring heather-flecked moors, gritstone rock formations and picturesque towns and villages, the Peak District has to be one of the UK’s most beautiful areas.

Wherever you find yourself parked up in this stunning countryside, you’re guaranteed to find a walking trail with delightful pubs along the way.

For the past 70 years, people have been leaving the cities behind and exploring the idyllic Peak District National Park – why not join them?

To help you explore this incredible landscape, the team at Motorhome Protect have put together this campervan-friendly touring route for you to follow on your next Great British getaway.

But whether it’s for just a couple of nights or a summer-long adventure, be sure to check your insurance for campervans is up to date before setting off.

Policies arranged by Motorhome Protect can cover all manner of mishaps, so give us a call today.

We start off in the quirky but stunning village of Matlock Bath in the south east of the Peak District area.

It’s a very popular place with plenty of cafes and takeaways and the village itself looks almost like a seaside town. Complete with promenade, gift shops, ice cream parlours, fish and chip shops and even a cable car!

Two of the main draws are the fantastic attractions of Gulliver’s Kingdom Theme Park and the Heights of Abraham. While Gulliver’s Kingdom is very much aimed at children and not the largest of theme parks there’s plenty to recommend it to visitors.

Particularly if you’ve already been hitting the walking trails and are looking for some adrenaline-fuelled thrills.

The views over the Peaks are stunning but there’s also plenty to explore up here, including the Tinker’s Shaft mine viewing platform, guided cavern tours, and exhibitions.

If you have a four-legged friend travelling with you then they also welcome dogs too.

A short two-mile drive north will bring you to the country town of Matlock which is the beginning of the 26-mile long but easy-going walking route The Limestone Way. 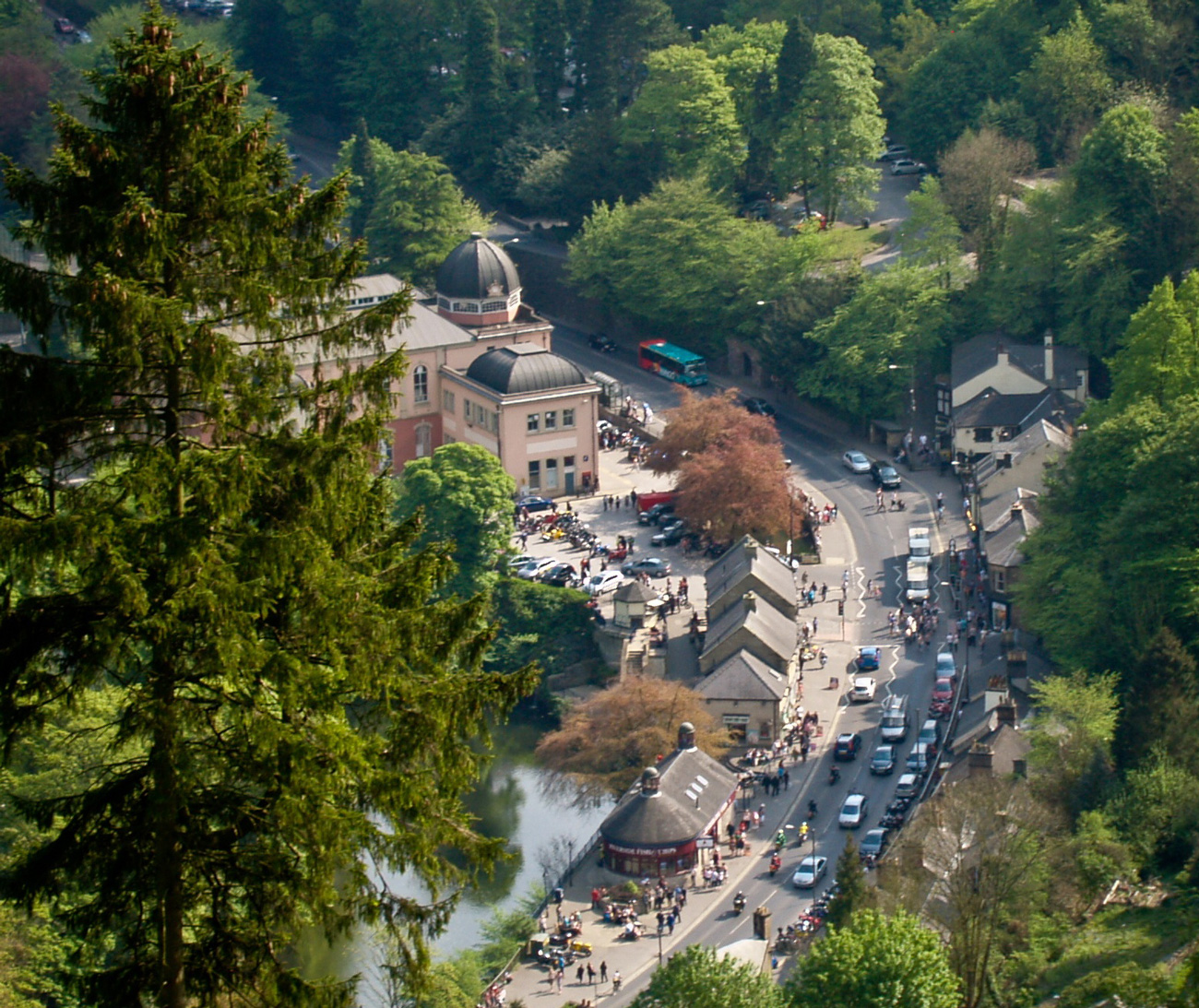 Heading north further along the A6 brings you to the famous market town of Bakewell.

Now, if you mention the name of Bakewell to anyone, they’ll immediately think of those delicious Bakewell Tarts. And rightly so, but that’s certainly not the only reason to visit this lovely town idyllically situated on the banks of the River Wye.

The whole town is certainly worth exploring while you scoff down one of their tasty tarts (although they’re called Bakewell Puddings here).

Visit Bakewell Old House, an intriguing little museum where you can hear stories of the town’s history and see lots of interesting artefacts.

If you head up the hill at the west end of the town centre, you’ll walk past a line of comely stone cottages to reach the historical gem that is All Saints Church – well worth a visit.

There’s also plenty to see outside of town. Two miles south of Bakewell is Haddon Hall, one of the finest medieval manor houses you’ll ever come across, which boasts a veritable rabbit warren of immaculately maintained ancient rooms.

Evidence of the ancient Bronze Age inhabitants of the area can be found at Nine Ladies Stone Circle located on the nearby Stanton Moor. According to local legend the circle is believed to depict nine ladies turned to stone as a penalty for dancing on a Sunday.

If you like your prehistoric sites then there are two relatively nearby sites: Arbor Low, a Neolithic henge, is six miles to the west, and Hob Hurst's House, a burial chamber, is three miles to the north east.

Also, not far from here is the spectacular tor of gritstone rocks Robin Hood’s Stride. Supposedly, the famous outlaw jumped from one peak to another. But at a distance of 15 metres, this may well be another local tall tale.

People can climb the rocks to get to the top, but unless you’re an experienced boulderer it’s not wise to try.

Surrounded on three sides by the national park and set among the surrounding hills – at a height of over 1000ft – can be found the historic market and spa town of Buxton.

Offering great facilities for any visitor the centrepiece of the town’s hilly, compact centre is the broad sweep of Georgian stonework known as The Crescent.

Built in the 1780s by the 5th Duke of Devonshire as an attempt to rival that famous southern spa town Bath. Also don’t miss the grandly refurbished Buxton opera House, the immaculate Victorian splendour of the Pavilion Gardens, and the first-rate Buxton Museum and Art Gallery.

After exploring the town, why not take a journey beneath the earth and explore the vast limestone caverns at Poole’s Cavern?

Then stroll through one of the attractions' beautiful woodland trails for a panoramic Peak District hilltop viewpoint. Take your camera.

Heading north-east back into the national park, a worthy stopping off point is the 517-metre hill of Mam Tor.

Its name means ‘Mother Hill’, so called because it stands out among a series of little hills surrounding it.

There is plenty of parking near the bottom of the hill and the easy climb to the top can take anywhere between 30 minutes to an hour and a half, depending on your fitness and how keen you are to get to the top.

There is a signposted circular walk taking you up the hill and back, and a map and further details are on the National Trust’s website. For comparatively little effort you’re rewarded with one of the most dramatic views in the Peak District. 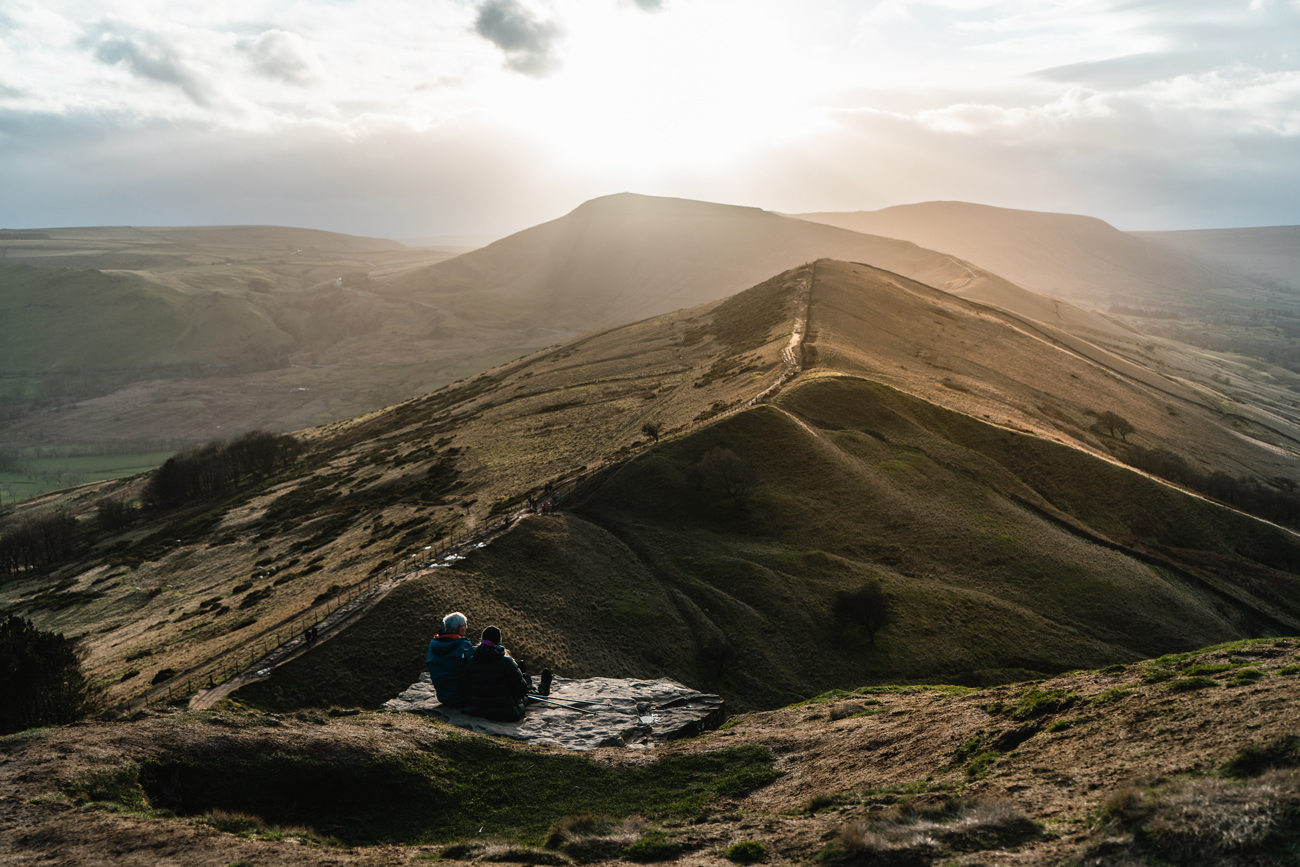 Next stop is the agreeable little village of Castleton which lies on the northern edge of the White Peak.

It’s an incredibly charming place with its huddle of old stone cottages surrounded by hills overlooked by the imposing ruins of the 11th Century Peveril Castle and set beside a babbling brook. But it’s beneath the ground that visitors flock.

Those stunning limestone hills that ring Castleton are riddled with a number of water-worn cave systems that have been developed as visitor attractions. All are easily accessible on foot from the village or in your campervan.

Perhaps the easiest to get to is Peak Cavern which is tucked behind the village. The cavern is informally known as the Devil’s Arse owing to the fiendish fashion in which the interior twists and turns – yuk!

Nearby is the fascinating Speedwell Cavern, an old lead mine and the deepest of the four cave systems.

Here you can take an amazing boat trip 450m under the hills to the awesome Bottomless Pit, a pool where 40,000 tonnes of mining rubble were dumped without raising the water level one bit!

If sparkly gems are your thing, then you also need to pay a visit to Treak Cliff Cavern and Blue John Cavern – the world’s only source of the highly-prized, semi-precious stone known as Blue John.

If you’re not a keen walker then you could be forgiven for passing through the tiny village of Edale without a moment’s thought.

However, this slender stretch of stone houses, scattering of pubs and B&Bs, and old stone church is the dream destination of countless numbers of walkers every year.

They arrive here in their droves to set off on the 250-mile Pennine Way up England’s backbone all the way to Kirk Yetholm on the Scottish border.

If that sounds a bit too much of a challenge then there’s an excellent and very popular nine-mile circular walk that’s worth doing.

It uses the first part of the Pennine Way leading up the steep climb of Jacob’s Ladder and on to the bleak table-top of Kinder Scout. From here you head back to Edale via Grindslow Knoll.

The Peak District is all about natural beauty but there’s also plenty of man-made beauty on offer, too.

One of our favourite sites is the incredibly impressive and beautiful Ladybower Reservoir near the village of Bamford.

You really don’t have far to walk to appreciate the reservoir in all its glory, as a stroll across the bridge lets you look down into its watery depths.

If you happen to be here when the water level drops, then keep an eye out for the remains of the nearby lost villages of Derwent and Ashopton.

They were both submerged here in the 1940s when the reservoir was built.

If you’re a film buff then also be aware that this is where the 1955 classic war film The Dam Busters was filmed. 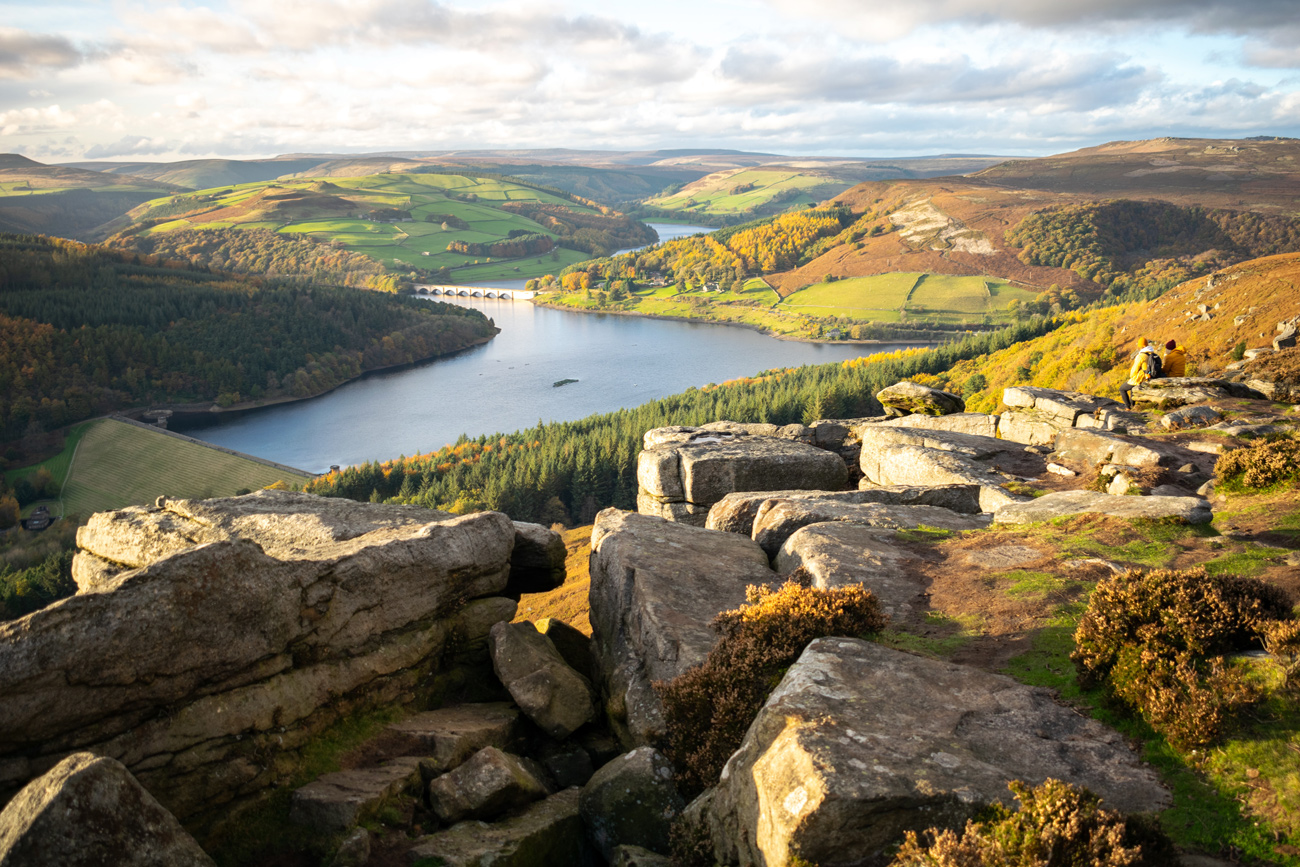 If you have a head for heights and love a good scramble then head to the popular and bustling village of Hathersage.

Surrounded on all sides by wooded hillsides and magnificent gritstone edges, it’s a particular draw for climbers who come to scale the vast and impressive Stanage Edge.

But don’t worry, you don’t have to don your climbing gear — there are several little pathways to the top that won’t require any special equipment.

Whichever way you reach the top, you can walk along the ridge and take in the phenomenal views – you really will feel on top of the world!

Other places to visit here include the much-restored church of St Michael and All Angels and its churchyard.

The lonely lead-mining settlement of Eyam might have passed unnoticed into the records of history if it hadn’t been for the incredible events that took place here in the year 1665-1666.

Today known as The Plague Village, during that year 260 of the tiny village’s inhabitants died from the Bubonic plague.

But what is most remarkable is that once they realised the plague had arrived, the villagers took the selfless action of quarantining themselves from the surrounding villages to try and stop the spread.

The measures they took worked and while it didn’t save them, the medical world subsequently used Eyam as a case study in the prevention of disease.

Many of the so-called plague cottages today bear plaques for the public to read, commemorating victims of the former household who perished.

You can hear the unique and harrowing story of the village at Eyam Museum. A fascinating but sobering visit indeed.

And so on to Baslow, the last stop on our tour of the Peak District. This pretty village sits delightfully alongside the River Derwent and is just a few miles north of the fantastically popular Chatsworth House.

Built in the 17th Century by the first Duke of Devonshire the sumptuous country house and its gardens are well worth a visit. 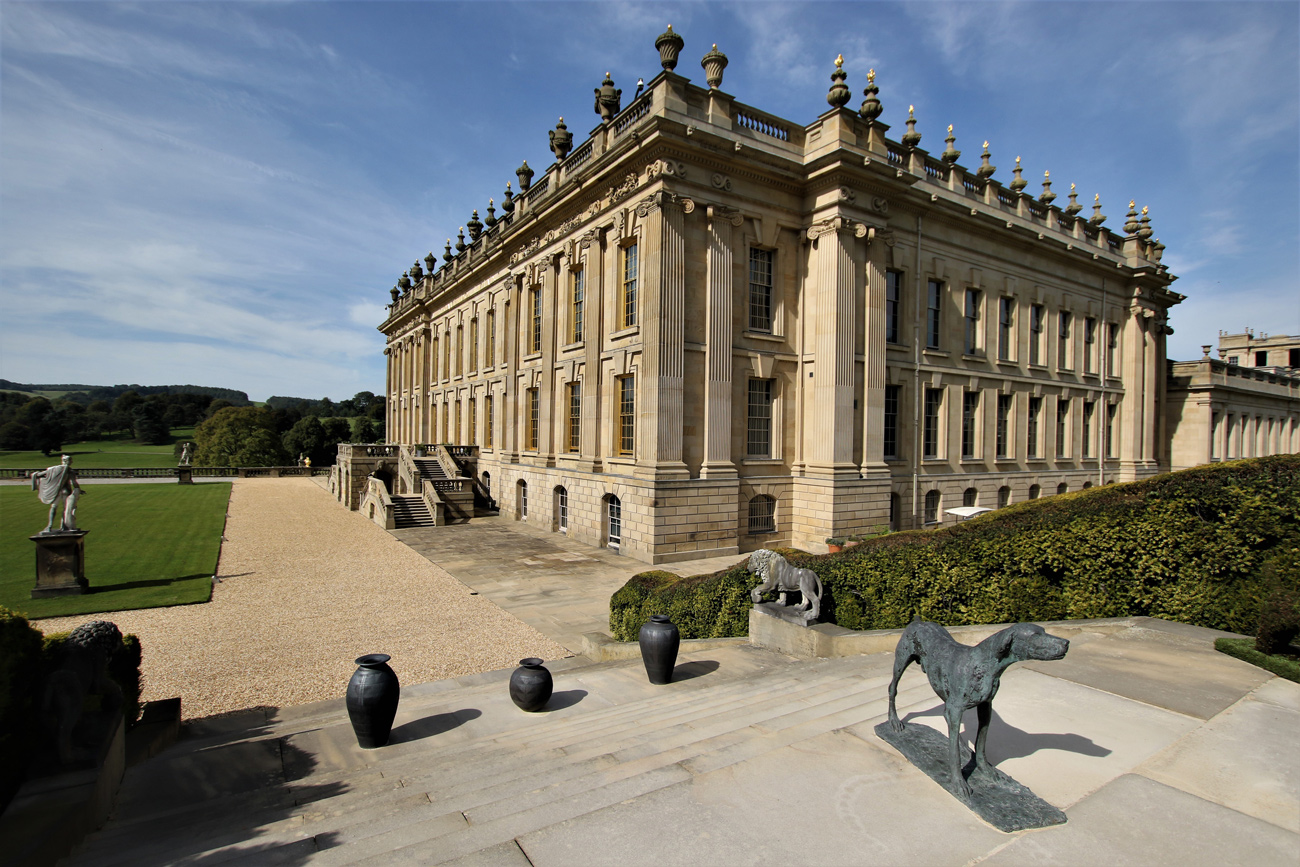 There’s clearly a lot to think about when planning any trip in your van, but never leave arranging campervan insurance until the last minute.

By arranging the right coverage for you and your vehicle in plenty of time means you can get on with your outdoor adventure safe in the knowledge you're well protected.

The experienced team at Motorhome Protect can help you find a range of quotes on specialist campervan insurance with the following benefits: