10 UK castles to visit this summer in your campervan

The UK is blessed with a colourful history and a vast array of castles to explore, perfect for a fun-filled campervan trip this summer. But which one will you choose to visit? Will your perfect campervan castle stop be a dramatic ruin perched on a cliff edge high above a secluded beach, or a battle-scarred fortress with an impregnable drawbridge and moat? Or perhaps you want more of a fairy tale feel with soaring turrets set amidst a magical woodland scene?

Whatever your dream castle is, you’re bound to find it in this stronghold scattered country. To help you, the team at Motorhome Protect have put together this countdown of 10 UK castles to visit this summer.

Whether it’s for a weekend away or a longer expedition, be sure to check your campervan insurance is up to date before you take a trip back in time! 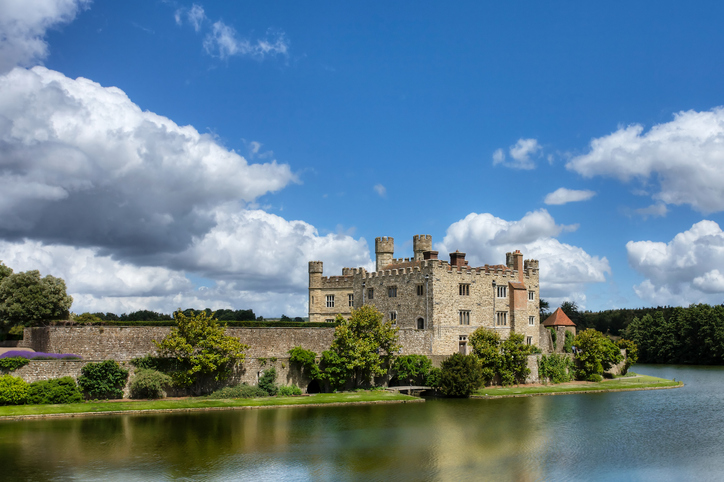 With a history stretching back to the times of the Norman conquest, Alnwick Castle is a fascinating place to visit as part of a long summer break or a simple day trip. Its esteemed castle walls have seen it all and offer the chance to look far back into the castle’s history. It’s been a besieged military outpost, a teacher training college, a home for child evacuees, a family home for the Dukes of Northumberland and a movie location.

Fans of Harry Potter will feel right at home here as it was a setting for the first two films in the movie franchise. From Broomstick Training to Dragon Quests, there’s a range of magical activities on offer for those who want to try out their quidditch skills.

If that’s not quite your cup of tea, then there are the fabulous gilded state rooms to stare at and the magnificent Capability Brown-designed rolling landscape to wander in.

The heart of England

You won’t be stuck for ideas of what to do at this stunning family-friendly castle set in the very heart of England. Bringing history to life has never been more fun here and there’s almost too much to do! For summer visitors, watching the jousting must be at the top of any to-do list. There’s also a Knight’s School to teach the art of self-defence with swords and armour, a full-size working trebuchet, and the UK’s biggest bird of prey show. And that’s just outside!

If a summer shower blows in then take cover with a castle dungeon tour, an audio-visual journey through the ages at the Time Tower or get horribly lost in the Horrible Histories Maze. Those who would prefer to avoid the sometimes-grisly side of life can instead enjoy the wonders of the Princess Tower. Or even just go peacock-spotting in the castle’s rolling grounds.

The beauty of the south east

Often described as Britain’s most beautiful castle, Leeds Castle is a joy for both first-time visitors and long-time fans. With such an exciting 900-year history to explore, this castle is certainly worth repeat visits. If you want a testing mental challenge, then have a go at the castle’s maze. Made up of 2,400 yew trees, this unique maze provides plenty of fun for the whole family. And once you’ve reached the middle, return to civilization through an underworld grotto, complete with macabre forms and mythical beasts. Very spooky even on a summer’s day!

In terms of summer-time activities the castle also boasts over 500 acres of sprawling gardens, castle-themed adventure playgrounds, and the wonderfully designed Leeds Castle Adventure Golf. Don’t forget to see the daily falconry demonstrations or get active with punting on the moat or an escorted Segway tour of the grounds. And finally, if you’re not worn out then there’s even a Go Ape Tree Top Adventure through the castle’s woodland. Phew!

Perched above the rugged north Cornish coast on rocky sea cliffs it’s easy to see why this dramatic location is said to be the site of the legendary King Arthur’s elusive castle, Camelot. The romantic ruins of Tintagel are inextricably linked with myths and legends of this land’s distant past. Owing to a recent project led by English Heritage, modern-day visitors can explore both parts via a footbridge linking the two. Even if Arthurian legends and mysterious spots like Merlin’s Cave are not your thing, you’ll be sure to leave inspired by its stunning beachside location. Don’t miss the towering, life-size bronze sculpture, Gallos, inspired by Arthur himself.

Where to stay: The Headland Caravan and Camping Park

With its secluded locations and narrow country roads it’s all too easy to feel lost in time in Cornwall. However, when it gets busier in summer these roads can be tricky for larger campervans. Protect yourself from bumps and scrapes to your precious vintage-style paintwork with campervan insurance.

As the birthplace of the first Tudor king Henry VII, Pembroke Castle should be on any history lover’s must-visit list this summer. But it’s not just about him. From the interactive and informative Keepers of the Castle show to the birds of prey flight displays, there’s a huge amount to see and do at this 11th century Norman stone castle. Young visitors can also learn some medieval fighting techniques and watch a dragon parade (unfortunately no fire-breathing is involved).

Pembroke Castle is also home to the Great Map. The largest map of Wales in the world, it shows the location of every important castle and religious landmark in Wales. It’s so big you can even walk or run around it!

If you’re feeling brave, then join the castle’s Ghost Finder General and delve into the creepy history of the place with the nightly Ghost Tour. It starts at 6.45pm and takes victims around the castle’s haunted passageways, gloomy towers, and spiral staircases. With a history or violent and untimely deaths you’ll never forget a visit into the castle’s ghostly past.

Pembrokeshire has some truly amazing outdoor activities on offer perfect for a summer vacation. From mountain bikes to surfboards, you’ll probably need to bring some expensive outdoor equipment along for the ride. If so, make sure they’re covered by your campervan insurance, too.

Indulge in a spot of romance

Unlike the rather intimidating appearance of the majority of Welsh castles, Castell Coch stands out with its fairy tale-like appearance. Rising up from the ancient beech woods of Fforest Fawr the cylindrical turrets look like something out of a dream. Quite unlike anything else in England or Wales.

The reason for this is that rather than an ancient castle it is, in fact, a 19th century construction built in the Gothic Revival style in the 1870s. While the current building is indeed Victorian, there was a previous Norman castle on the site dating back to the 11th century.

Castell Coch was the creation of John Crichton-Stuart, the 3rd Marquess of Bute, who hired the renowned Victorian architect William Burges to reconstruct a castle based on the medieval remains. While the exterior is marvellous it’s the interiors that are truly stunning and will leave you grabbing your camera. Elaborately decorated with specially designed furniture and fittings it’s been lauded as a triumph of the High Victorian Gothic style.

Where to stay: Trecastle Farm

Dominating the Scottish capital’s skyline from its position on the Castle Rock is this truly iconic castle. As perhaps the most recognisable symbol of the City you’ll want to take plenty of snapshots from afar before getting closer. The best way to approach is to walk along the impressive Royal Mile that runs through the heart of Edinburgh’s Old Town, connecting the castle with the Palace of Holyroodhouse. The mile is overlooked by impressive, towering tenements, between which cobbled streets and narrow stairways interlock to create a mysterious underground world. Particularly evocative at night!

Try to plan your visit around lunchtime to hear the firing of the one o’clock gun, and make sure to leave time to check out the mysterious Stone of Destiny and the priceless Scottish Crown Jewels on display in the Crown Room. 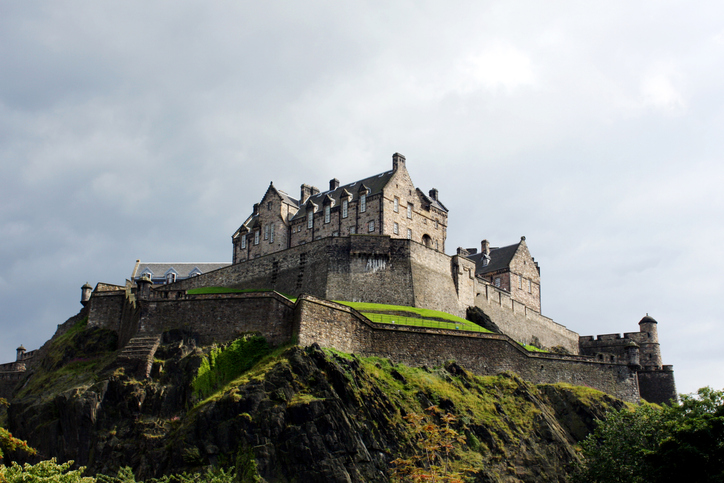 When it comes to great Scottish castles, they don’t come much better than Dunrobin – the largest in the Northern Highlands and one of Britain’s oldest continuously inhabited houses. With its pointed spires and vast windows, this turreted wonder looks like it has been lifted straight out of a storybook. Dating back to the 1300s, the castle has been constantly updated over the years. Indeed, those iconic spires are just some of the architectural influences brought here by Sir Charles Barry, the designer of London’s Houses of Parliament. With peaceful walled, formal gardens to explore and the Moray Firth beyond, you’ll never want to leave. Unfortunately, you can’t stay overnight, but you can take a tour of the interior and gardens and visit the remarkable Victorian museum. And perhaps stay for a pot of tea in the delightful tearoom.

One of the most iconic monuments in Northern Ireland, Dunluce Castle is precariously perched on the craggy and treacherous Antrim Coast. With a long and tumultuous history this ruined medieval castle was once the seat of Clan McDonnell and is well worth a visit today. You get into the castle via a bridge. With sheer drops all round, it’s probably best not to look down.

This whole area is perfect to visit during the summer and is full of some dramatic stories to go with its location. The mythical tales of hauntings, banshees and how the entire castle kitchen crashed into the sea one stormy night are enough to bring a chill on even the warmest of summer days.

Where to stay: Highview Holiday Park

The National Trust’s Castle Ward is a fascinating place to visit at any time of year. Home to the Ward family since the 16th century, it’s the location of several different styles of property. Old Castle Ward and its historic farmyard will be very familiar to any Game of Thrones fan. The site was the location of the Stark’s home of Winterfell and the stunning backdrop to the series pilot and much of season one. It’s also home to several other key scenes that you can explore with a Winterfell tour. If trying on costumes and practising your archery are not for you, then there’s a very unusual 18th century mansion to explore, with not a dire wolf in sight.

If you’re visiting and decide to head on down to the Republic of Ireland, then call your campervan insurance provider to make sure you’re covered for travel in the EU.

While there’s so much to think about when planning a castle adventure in your van, you must never forget to arrange campervan insurance. Arranging the right coverage for you and your vehicle means you can get on with your historic adventure safe in the knowledge you're protected.

Speak to the experienced team at Motorhome Protect today. They’ll help you find cover that includes the following benefits:

We can also find cover for customers with previous claims and convictions.